Visiting Gov Vi at The Mansion 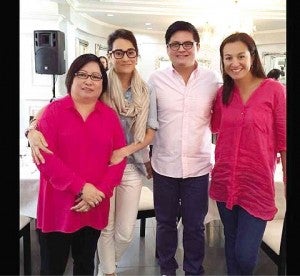 It was such a delight to pay Gov. Vilma Santos a visit in her headquarters (dubbed “The Mansion”) at the Batangas Capitol last Friday. As always, she had her staff prepare a sumptuous lunch of Batangueño dishes like  beef bulalo and sinaing na tulingan.

I’ve seen The Star for All Seasons  in action as a governor many times, yet it never fails to amaze me to see how hands-on she is.

The dashing Vice Gov. Mark Leviste also gave us a warm welcome. He fondly calls Ate Vi his ka-love team in their baluarte.  “I’m her Ralph Recto, Edu Manzano and Christopher de Leon combined,” he quipped. “But unlike in her movies, wala akong kahati. It’s been 10 years, and our partnership is still solid.”

Ate Vi gave instructions to Mark and the Capitol’s staff to organize a Recognition Day for two Batangueños: UAAP Women’s Volleyball MVP, Alyssa Valdez (who went to elementary and high school in San Juan), and Rudy Ortea (of San Jose)  who finished third in the recent bar exams.

“I’d like to give them a plaque and some monetary incentive,” Gov. Vi said. “They have given us two more reasons to be proud as Batangueños.” No doubt, Alyssa and Rudy are equally proud to have Ate Vi as their home province’s leader.

After my visit, I went home  smiling at the thought that I have someone like Ate Vi, who is  never too busy to be a friend.

“I got tired of running  my big hotel, Imperial Palace, so I came up with this smaller venue,” Mother Lily explained. “I designed it myself. Lorna Tolentino plans to put up a fine-dining resto on my other lot, adjacent to this one.”

Seeing Mother Lily made me miss my own late mom. They were like peas in a pod. I feel so blessed to have Mother Lily as second mom. 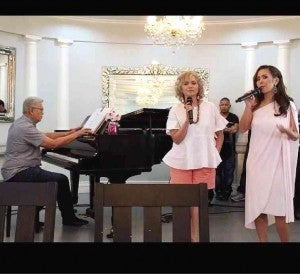 CELESTE Legaspi (center) and Rachel Alejandro serenade their manager, with Ryan Cayabyab on the piano.

I had never seen Korina sexier! I asked how she lost weight. She said she went on the Cohen Diet.

Mikee was  the  picture of  a doting  ninang to Lucia. Mikee said she missed holding a baby because her kids were already big.  “May sungay na,” she  jested.

Also at the bash were Nadine Tengco, resident food coach of “The Biggest Loser Philippines” and the dynamic sisters behind  The Sexy Chef, Rachel Alejandro  and Barni Alejandro-Rennebeck.

The siblings’ cookbook is currently a bestseller in National  Bookstore. Their own cooking show premieres April 20 on Colours, Cignal Digital TV. (Visit www.thesexychef.ph or call 0917-7992433 for catering and delivery.)

Rachel and Celeste paid homage to GR,  their manager of many years, with an impromptu mini-concert with no less than maestro Ryan C. on the piano. They told the birthday girl she should cry as they serenaded her. But  the ever-fierce GR refused to shed a tear.

“I’m too happy to cry!” she exclaimed.

Kudos to the Alejandro sisters for perfecting their recipe for success and to Tita GR for showing us that talent managers ought to be respected instead of feared.

To my readers in the United Arab Emirates, don’t miss MYMP’s concert. “Electrified (The 10th Anniversary Album Tour).” It will  serve as an antidote to your homesickness. The show, mounted by Striker Events, is set March 28 and 29 at Kitakits Kafe and Klubb in Marco Polo Hotel Dubai. (Call 04-3914304 or visit www.strikereventsdubai.com). Wish I could take the next plane out to catch the show!

Thanks a mil to Weng Alcantara for the kind assistance. Maraming salamat, engineer Nerio Ronquillo and Badette Arada, for accommodating me and my friends.