A tearful renewal of vows 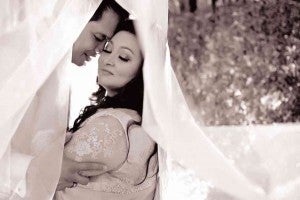 Too bad I missed their silver wedding anniversary rites at Blue Leaf.

Friends who witnessed their renewal of vows told me that Alvin was emotional. Even before Cindy walked down the aisle, “The Captain” was already crying like a baby. He knelt in front of Cindy before they proceeded with the march.

Everyone was moved by their heartfelt vows. Clearly, their marriage has survived the test of time because they put God at the center of their relationship.

The reception started with a prenuptial teaser of the couple made by Nice Print. In the video, their eldest son, Angelo, and his girlfriend, Jasmine Maierhofer, reenacted the first meeting of Alvin and Cindy in a Betamax rental shop in the 1980s.

Then the “newlyweds” entered the hall dancing to “Oppa Gangnam Style.” Afterward, they had a sweet “first dance” to the tune of “Kahit Maputi na ang Buhok Ko.”

Three days after the celebration, I bumped into Alvin and Cindy at Chivz Lounge Bar (G Strip Greenhills).  They are never too busy to go out on dates. Perhaps that’s one of the secrets to their lasting union. They’ve been together 25 years yet they continue to make memories and also make happiness an everyday thing.

Ai-Ai de las Alas was reportedly smitten with Dennis Trillo after meeting him at the Star Awards.

The comedienne even flirted with the Kapuso star on stage. Knowing how playful Ai is, maybe she was just trying to make people laugh.

How does Dennis feel about what transpired? “It was truly flattering,” he quipped. “That night was one for the books! I was sitting between Miss Ai-Ai and my childhood idol, Aga Muhlach. They kept making kulitan. It was really fun. I was starstruck the whole time. It was my first time to meet her. She’s very funny.” 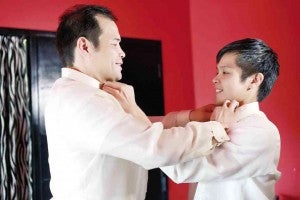 THE CAGER gets ready for the big event with the help of son Asher.

Could he fall for an older woman like Ai? “In love,” he pointed out, “nothing is impossible!”

Ai has had her share of May-December affairs. MAYbe this time it will not last only until December. CougAIr, bring out your “alas!”

What a blast I had at the “Shoe Buffet” of La Mode Moderne pour les Femmes (MMF) at C3 Events Place in Greenhills. It marked the launch of young entrepreneur Shawie Cy Chan’s fab shoe line.

Spotted raiding the roomful of shoes were Isabel Oli, Chynna Ortaleza, Ryza Cenon, Roxanne Barcelo, Radha, Mocha, Aby Asistio, Sam Oh, Margaux Medina, Kevin Balot and other fashionistas. It was such a SHOEper fun girl-bonding spree as we turned Imeldific for a day.

It made me feel like Cinderella when I found the perfect pair. So maybe Prince Charming is just around the corner? (Follow MMF on Instagram @mmfpourfemmes.)

The second installment of “The Hunger Games” franchise will ignite your small screens again with the release of “The Hunger Games: Catching Fire” on Blu-ray, Limited Edition 2 Disc DVD and a 2-Movie Set DVD (distributed exclusively by C-Interactive Digital Entertainment).

It’s available at Astroplus, Astrovision, Odyssey and O’ Music outlets, and is packed with over two hours of extensive, must-see bonus materials that include a behind-the-scenes look at the making of the film, deleted scenes and an audio commentary with director Francis Lawrence and producer Nina Jacobson. (For more info, visit www.c-interactive.com.ph)

Other new releases include the Unrated Director’s Cut of “Riddick,” “Escape Plan” and “The Mortal Instruments: City of Bones.”

Pass the popcorn and let the movie marathon begin!

Congratulations to my dear friend Jerry Yap for winning the darling of the press award at the PMPC Star Awards for Movies.

Thanks a mil to Miss Shawie, Hazel de los Santos, Lorna Fabian, JB Bolanos and Vince Arie for such a great time at the MMF launch.