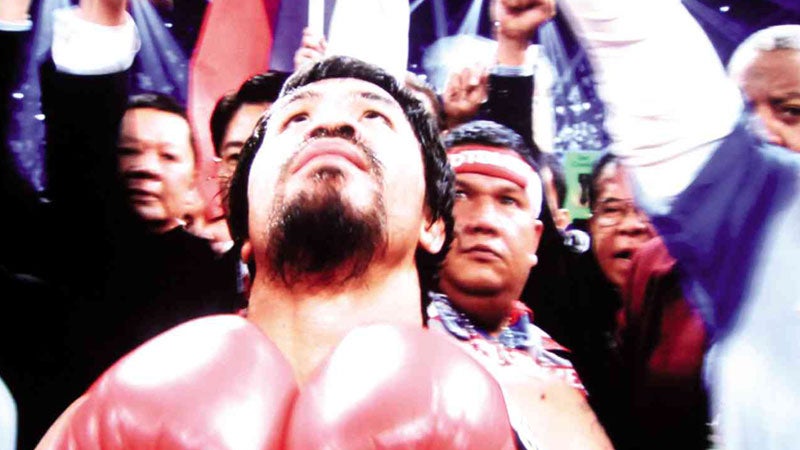 SCENE from “Manny,” a docu that took over four years in the making
PHOTOS BY ARNOLD ALMACEN

The biggest challenge in making the documentary “Manny” was sifting through 1,200 hours of raw  footage, said coproducer Don Puno. The production team had to follow Pacquiao for four and a half years in making the docu.

“The hardest part was editing. Manny also gave us 200 hours of his personal home videos of his earlier fights and his kids’ birthday parties,” Puno told the Inquirer  shortly after the Philippine premiere of “Manny” at the Newport Performing Arts Theater of Resorts World Manila on Monday.

“Another difficulty was the fact that Manny is a moving target, meaning we’re shooting a guy who is in the middle of his life,” Puno explained. “We didn’t know how to end the story. There was no script. We just had to figure things out as we went along. Only when Manny was knocked out [by Juan Manuel Marquez in December 2012] did we find the beginning of our story.”

The film, directed by Filipino-AmericanRyan Moore and Academy-award winner Leon Gast (“When We Were Kings”), was among the 150 films selected out of 2,000 entries that debuted at the recent 2014 South by Southwest Film Festival in Austin, Texas. 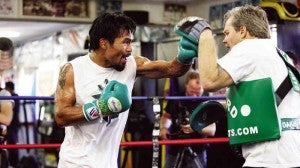 The docu is narrated by Oscar-nominated actor Liam Neeson.

“We originally wanted actor Mark Walberg to do it, but he was busy,” said Puno. Neeson, however, made the project more interesting. “Neeson was a boxer in Ireland. He had about 40 amateur fights— that’s how he got his trademark crooked nose. As a retired boxer, we knew he’d be able to understand what Pacquiao went through. We sent him a letter through his agent. Despite having eight other projects, he accepted.”

Neeson, as it turned out, is a big Pacquiao fan. He agreed to be a partner in Puno’s production and accepted a minimal talent fee.

“Liam has never met Manny. Before this, we sent him a video of Manny saying hello. He showed it off on Jimmy Kimmel’s talk show recently. He also did an impersonation of Manny.”

The impetus of the project was Puno’s high-school classmate, Moore. “In 2010, he gave me a call about this and I immediately said yes. For years, Filipinos have been trying to find ways to tell our story to the world. We thought, what better way to do it than through Manny Pacquiao. He’s probably the most recognizable Filipino now,” he said.

Sportscaster Chino Trinidad insisted that both local and foreign audiences would appreciate the docu. He remarked: “It tells the struggle of a person who has special gifts, who refused to give up when faced with the most difficult problems.”

Trinidad, who has been covering Pacquiao’s career for over a decade now, said “Manny” offered another interesting story, that of the boxer’s wife Jinkee. “She is the woman behind the man’s success. Jinkee was frank and brutally honest in her interview,” said Trinidad. 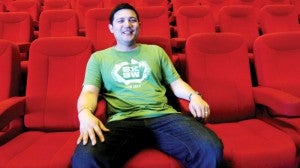 COPRODUCER Don Puno recalls that the editor had to sift through 1,200 hours of footage.

Rumors of Pacquiao’s womanizing and his marital problems were tackled in the film.

Hollywood personalities like Wahlberg, Jeremy Piven, Will Ferrrel and Dan Hill also appeared in the docu.

Kimmel quipped: “Manny to Filipinos is Elvis Presley and John F. Kennedy rolled into one.”

Executive producer is Jay Bajaj and editor is Lenny Mesina.

Coproducer Ricky Puno said the team didn’t have a hard time asking celebrities to be part of the docu. “They  said they found him charming and lovable.”

Trinidad remarked: “Through the movie, we will be able to appreciate the real Pacquiao. Sadly, he has had to deal with controversies lately as a result of how poorly he managed his life.”

Pacquiao, who is currently in Los Angeles to train for his fight with Timothy Bradley on April 12, has not seen the film yet, related Ricky. “Perhaps he didn’t want to get distracted. But I think he’ll enjoy it, too.”

Read Next
Star Awards sizzlers
EDITORS' PICK
Duterte vouches for Galvez: Why focus on alleged corruption in vaccine pricing?
New Year, New Rediscoveries
Experience clearer calls nationwide with Smart VoLTE
Vaccine nationalism puts world on brink of ‘catastrophic moral failure’ – WHO chief
Driving can be even more rewarding this New Year — here’s why
Norway advises caution in use of Pfizer vaccine for the most frail
MOST READ
Duterte to firms: No franchise until you settle your accounts with gov’t
7 copassengers of UK variant patient can’t be traced
3 things Leni can learn from Biden’s victory
#DefendUP trends after DND scraps agreement with UP
Don't miss out on the latest news and information.