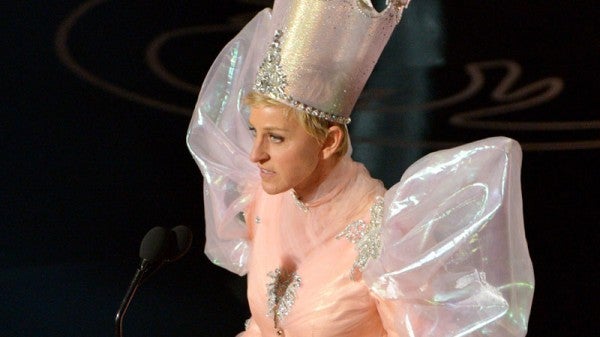 Ellen DeGeneres speaks during the Oscars at the Dolby Theatre on Sunday, March 2, 2014, in Los Angeles. AP

HOLLYWOOD – Ellen DeGeneres delighted her Oscars audience on her return to hosting duties at the Academy Awards on Sunday, reeling off a string of one-liners to earn critical plaudits.

The 56-year-old comic followed confidently in the footsteps of celebrated Oscars hosts such as Billy Crystal and Bob Hope, mixing wry humor and gently poking fun at members of her A-list audience at the Dolby Theatre in Hollywood.

It was in stark contrast to last year’s raunchy opening monologue by comedian Seth MacFarlane, which divided critics.

“Ellen DeGeneres did not sing a song about seeing actresses’ boobs on screen, which, after last year’s Seth MacFarlane skit, represents some sort of progress,” Variety wrote in a snap review of DeGeneres’s efforts.

“Stripped of any pyrotechnics – no song-and-dance number, no film montage – the opening actually worked reasonably well, mostly because it placed the focus on the movies and the stars.”

DeGeneres, who hosted the awards for the first time in 2007, aimed lighthearted jokes at various members of the audience, including Liza Minnelli.

“I have to say, one of the most amazing Liza Minnelli impersonators I’ve ever seen in my entire life,” DeGeneres said. “Good job, sir.”

Last year’s best actress winner Jennifer Lawrence was also targeted, with DeGeneres revealing that the star had tripped out of the limo which had deposited her on the red carpet.

It followed last year’s memorable Oscar moment when the starlet took a tumble as she went to collect her award.

“If you win tonight, I think we should bring you the Oscar,” DeGeneres quipped to the “American Hustle” star, who eventually lost out to Lupita Nyong’o in the best supporting actress race.

Bruce Dern, nominated for his turn in “Nebraska,” was meanwhile reminded of his illustrious heritage.

“His grandfather was the governor of Utah. His great uncle was a Pulitzer prize-winning poet. And his godmother was Eleanor Roosevelt. And here you are, among us tonight – what went wrong?”

DeGeneres also alluded to the swirl of uncertainty around the best picture race, where harrowing slavery drama “12 Years a Slave” is tipped for glory.

“Anything can happen, so many different possibilities,” DeGeneres said of the best picture category.