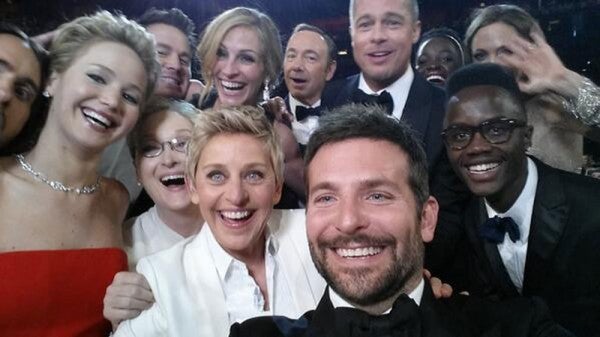 HOLLYWOOD – Oscar host Ellen DeGeneres set Twitter ablaze – and even sparked problems for users –on Sunday when the “selfie” photograph she took with Hollywood stars at the Academy Awards went viral.

DeGeneres, who joked with A-listers throughout the show, corralled a crowd of stars including Brad Pitt, Meryl Streep and Jennifer Lawrence and posed for a photo that almost instantly circled the globe.

“You get in here, too, Julia. Lean in,” she said to Julia Roberts.

The resulting photograph earned nearly a million retweets in minutes in 40 minutes.

The crowd included Kevin Spacey, recently of Netflix’s “House of Cards” fame, and Lupita Nyong’o, who moments later won an Oscar for best supporting actress for “12 Years a Slave.”

“Channing (Tatum), if you can get in also. Bradley (Cooper), come in,” the host quipped to loud laughter.

Eventually the group grew big enough that Cooper kneeled in front of DeGeneres and snapped the pic with her smartphone.

“If only Bradley’s arm was longer. Best photo ever,” DeGeneres posted along with the photograph on her Twitter feed, @TheEllenShow, during a break in her hosting duties.

Within five minutes, it had nearly 100,000 retweets, and about 45 minutes after that, her tweet it had garnered more than one million retweets.

ADVERTISEMENT
Read Next
Nyong’o, Leto, ‘Gravity’ win at Academy Awards
EDITORS' PICK
Notice of 2020 regular meeting of stockholders June 18, 2020
SM prepares for ‘safe malling’
Leveling up your ‘lutong bahay’ with the kitchen companion you never knew you needed
NBI, Immigration to join hunt for ‘underground’ medical clinics
2 Chinese nationals arrested in raid on another unlicensed COVID-19 hospital in Pampanga
P2.2 trillion in losses: Cost of COVID-19 impact on PH economy
MOST READ
NCR is ready for GCQ — Palace
Revillame tells Roque: ABS-CBN is in my heart despite being in rival network
Filipino kids in Ireland orphaned due to COVID-19
Metro Manila mayors told: Keeping bus, jeepney ban ‘catastrophic’
Don't miss out on the latest news and information.