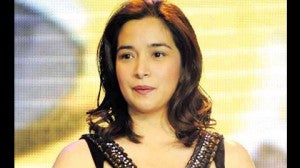 Shalani Soledad, President Aquino’s ex-girlfriend, is engaged to be married.

“That was an engagement ring. I asked her to marry me a week ago,” said Romulo, the 44-year-old bachelor son of former Foreign Secretary Alberto Romulo.

Romulo said he and his fiancée, who is 31, are now talking of a wedding possibly in the early part of 2012.

The whirlwind romance—they reportedly met at the Valenzuela Day celebrations last July 11—became public currency late last month when the couple admitted to be going out.

“Some may say it is too soon, but I think we’re both old enough to know what we want in life,” Romulo said, adding that he had found “the one.”

“We can talk to each other for hours, even just the two of us, we have never been so happy,” he said.

Agriculture Undersecretary Berna Romulo-Puyat, who was at the plenary budget deliberations at the House of Representatives on Wednesday, said she was happy for her brother.

According to Puyat, Soledad was well-liked in the Romulo family. She said her brother introduced Soledad to the family at dinner two weeks ago.

She said their mother also appreciated that Soledad came from a city that was named after revolutionary hero, Pio Valenzuela, the Romulo matriarch’s grandfather.

Puyat said her brother was obviously smitten with Soledad, the first girl he has introduced to the family in four years.

“He doesn’t bring women to the house unless he is serious. The last time he introduced somebody to us was four years ago, Lisa Gokongwei,” she said.

She said that Romulo regularly goes to pick up Soledad at the TV5 studio where she co-hosts the “Wil Time Big Time” television game show with comedian Willie Revillame.

And whenever they can, they go to Quiapo church, Puyat said.

Romulo said he had no problem with both of them pursuing parallel political careers once they are married.

He said he did not object to Soledad’s continuing to appear in television game shows.

“She was already in showbiz when I met her,” he said.

Romulo is planning to seek a third and final term as Pasig congressman, while Soledad is said to be considering running for a congressional seat in Valenzuela.

The two politicians, who both belong to the Kampi political party, reportedly met when Romulo was invited by Mayor Sherwin Gatchalian to the Valenzuela Day celebrations last July 11.

The two were subsequently constantly spotted watching movies and dining out with friends.

Romulo earlier admitted to having been immediately captivated by Soledad’s beauty and simplicity when they first met.

Soledad was Mr. Aquino’s girlfriend for a little over a year. They broke up in October 2010, amid speculations that his hectic schedule once he became President made it difficult to maintain the relationship.