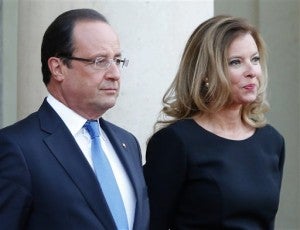 PARIS  — The actress whose secret tryst with French President Francois Hollande led to his separation from his long-time girlfriend has made her first public appearance since the scandal broke.

Julie Gayet showed up Friday night for the Cesar Awards, the French version of the Oscars. She had been widely expected to stay away, despite her nomination for best supporting actress for her role in “Quai d’Orsay,” playing a seductive aide at the French Foreign Ministry.

Gayet, apparently unaccompanied, joined French and American cinema luminaries who packed the elegant Chatelet Theater. Cameras showed only her back.