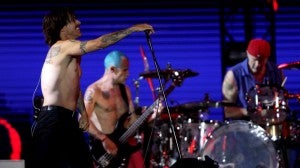 While so many were lucky enough to have had the opportunity to have been there to watch the 2-day 7107 International Music Festival held recently at the Global Gateway Logistics City in Clark, Pampanga, I, on the other hand, am more curious to know how it must have felt for our local artists who had the privilege of being billed to perform at this International Music Festival that showcased some of our finest local acts and more than a handful of popular foreign acts, with the legendary and world-renowned Rock & Roll Hall of Famers, the Red Hot Chili Peppers, leading the roster of featured international acts.

So, I have asked a handful of local artists who had participated at the said momentous music event to share with us their thoughts and feelings on what, surely, was for them an entirely unforgettable experience.

*Take note: These four featured musicians below represent only four acts of more than a dozen local bands and groups that got to perform in this international music festival.

Below are their answers:

MIGUEL:  Remembering details of dreams is difficult isn’t it? The weekend was dream-like..(having not slept since a gig the night before the fest at Handlebar,Makati) yet everything was complete bliss for me on and off the stage…unadulterated hedonism.

Brought home a satisfied soul with super-8-esque memories of friends & lovers, laughter, trippin balls, and the crowd dancing while we performed our guts out. RHCP was the sweetest icing on top–they sealed the deal. Despite the bad rep, rumors, and naysayers before the fest; 7107 lived up to their hype.

MIGUEL: It holds an opportunity for me to work on my craft as a musician and as a mover of the Boss. Working on my passion to actualize my dreams gets me reeeeally high. solid music + legit stage + large audience + variety + party + $$$ = win-win-win situation right there.

MIGUEL:  Nah.. would have loved to meet the Peppers though.. i can imagine monkeyin’ around with them eating carrots drinking beer. I was introduced to some dude from Natives while the Peppers were on..he seemed like a nice creep.

MACKY: Being able to perform in a solid festival atmosphere is already a very profound experience for me as a musician. Now, playing on both days and both stages of the festival? That’s just priceless! As I was playing I felt and saw how my fellow band mates seized the moment and it was a very empowering experience. All the energy, those bright electric moments onstage and seeing crowd reactions (because we played afternoon sets) are all still vivid to me. Being able to watch Kendrick Lamar and the Red Hot Chili Peppers, whewwww!! I don’t even know what to say! As my friend and band mate told me, (and we’re both the same) we don’t collect anything material in our lives so we just watch concerts of our favorite acts. Also seeing a lot of old and new friends at the venue was just overwhelming. Peace, love and art was all over the place :)

MACKY: I think this festival kind of put our country in the map. It’s the era of festivals right now. All around the world they hold different festival-type concerts with different themes and I believe this one made us Pinoys legit movers in the global music scene.

MACKY: We only got to meet Immerze, a rap act from Vancouver, Canada. We shared a few drinks and chat in the tent backstage with their DJs, producers, managers and emcees. I guess it was his birthday and he just realized it a bit too late hahahahah it was all good fun! Real people!! Hope to link up with them again and maybe jam since we share the same passion for hiphop :)

MACKY: The best part of being able to perform 7107IMF??? Hmmmm….. EVERYTHING!!!! Hahaha :) Great stage set up, banging sound system, freakin’ quality exposure for us musicians, being part of a whole organism of music and creating an atmosphere of peace, love, sharing, creativity, being able to inspire and entertain people, free food and drinks (VIP perks), I can go on and on! But I have to give props to the production team for putting this together and being on point when it comes to the schedule of performances. They brought the people together, and that’s the best of the best! ;)

3) Ponchie Buenavista (Guitarist) of Encounters With a Yeti.

PONCHIE: The absolutely amazing performances of foreign and local artists but more so the countless good memories of people and artists converging in one place to have this singular experience that can only be had from a shared love for music and its diversity. That for a weekend you were able to experience the thrill of being a performer as well as the sense of awe that comes with being a part of the audience, a music fan. The electric yet cheerful and pleasant atmosphere that prevailed over the entire weekend.

PONCHIE: Assuming it will be an annual thing from now on, it finally puts the Philippines on the map as regards to music festivals worth experiencing like Lollapalooza, Coachella, Burning Man, ATP and Big Day Out. Is that setting the bar high? Well, with our people’s hospitality and embracing nature, our country’s breathtaking destinations, as well as the tremendous amount of local talent available that can be featured, it can only be nothing but a fantastic yearly experience if done right. An international music festival presents an invaluable opportunity to showcase our local talent to an international audience while immersing the local audience to the diverse spectrum of music beyond our shores.

PONCHIE: Unfortunately no, but I was happy enough to have been able to watch them while hanging out and sharing thoughts with local music stalwarts, colleagues and (Terno Recordings) labelmates.

PONCHIE: The excitement of sharing a stage with all these brilliant local and international artists and to have done it for a fantastic crowd; more importantly, to have become a part of a milestone in our country’s music and pop culture history. There will probably be even bigger and better acts featured in future stagings of this event, but you’ll forever be a part of the first. One of the pioneers.

MARTIN: That huge stage and the way the crowd reacted. We were overwhelmed and very grateful with how it turned out (our set) It definitely tops every gig we’ve ever had and to play on the so called “OPM” or second stage with other local acts that we looked up to was truly amazing. It is something we definitely won’t forget.

MARTIN: We think it’s amazing that the music scene in general has been rising again and International music festivals just raise the bar even more. It gives all the local acts a chance to show what they have in store for everyone as well as watching their idols play the same event. It’s a win/win situation for us local musicians.

MARTIN: We sadly couldn’t. I mean we were able to go outside their tents and all that but we sadly didn’t get to meet them personally. It was awesome knowing that they were just a few tents away from us though. Haha!