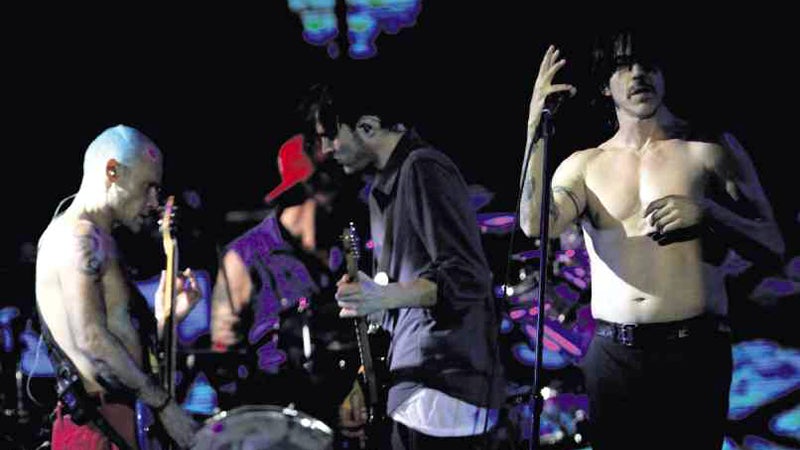 CLARK FREEPORT ZONE—The crowd was abuzz and buzzed out. The 7107 International Music Festival field at the Global Gateway Logistics City area simmered with excitement on Sunday night; the air thick with cigarette smoke and the unmistakable whiff of weed.

On that second and last night of the fest, to deafening roars and shrieks, members of the red-hot Red Hot Chili Peppers (RHCP) took the stage one by one—Chad Smith (drums), Josh Klinghoffer (guitar), Michael “Flea” Balzary (bass) and Anthony Kiedis (vocals)—and set the pace with an opening jam that rose to a maddening crescendo and exploded in a lights-and-sound spectacle. The icons have descended. 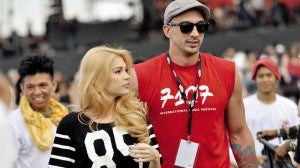 The US band, seven-time Grammy winner, opened its 90-minute, 18-song set with the hit “Can’t Stop.” (And how the crowd wished it wouldn’t!) RHCP was performing in the country for the first time and the fans were resolutely soaking in every bit of the repertoire that heated up the otherwise chilly night.

Instantaneously, they raised their fists, jerking their heads to the funky beat and partly  rapped verses. Only the first number, and the rock stars were already in full throttle.

Hippity-hopping, whirling and flailing across the stage, jumping and bike-kicking in the air, Kiedis moved briskly from one showstopper to another—“Snow (Hey Oh),” “Dani California,” “Right on Time,” “Soul to Squeeze,” “Californication,” “Look Around,” “By the Way” … 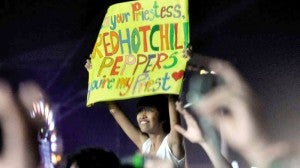 A FAN expresses her love.

Finally, with familiar guitar licks from “Give It Away,” RHCP concluded over 24 hours of music over the course of two days.

While everything else seemed like a blur after RHCP set the stage ablaze, it should be put on record that many other artists who went onstage before the band performed fantastic sets. With the 55 acts in the lineup that covered a spectrum of genres—rock, pop, indie, hip-hop, electronic dance music—7107 had almost everyone’s music preferences covered. On two stages, no less. 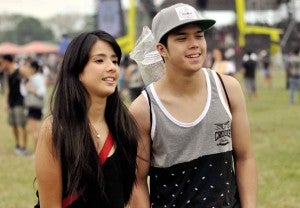 The Australian electronic duo Empire of the Sun pulled out all theatrical stops in a production that featured a bevy of dancers. Dishing out glam synths and reverb-heavy tunes (“We Are the People,” “Walking on a Dream”) was Luke Steele, whose showmanship was matched only by his ornate, intergalactic journeyman costume.

Although Itchyworms performed during the day, and was thus unable to take advantage of the main stage’s fancy lights setup, the band delivered a fun and rollicking pop-rock set that aptly ended with “Beer,” to the delight of the booze-guzzling crowd.

Up Dharma Down’s Armi Millare sang woefully of unrequited love in “Oo” and of hesitation in “Indak,” in her sultry and deceptively powerful voice that undulated in the glow of the afternoon sun. 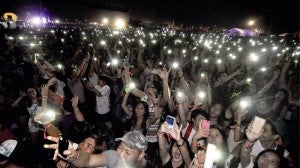 Lourd de Veyra of Radioactive Sago Project may have lost a big chunk of the audience to the US rock band The Red Jumpsuit Apparatus, but the appreciative few who gathered around the second stage were rewarded with a burst of festive and bombastic sounds of percussion and brass instruments in a 30-minute jazz-rock set.

While the second day catered more to rockers, the opening day was party-goers heaven, with DJs Riddler, Kaskade, Alvaro and Reid Stefan turning the immediate area around the main stage into a massive dance hall, with relentless bass lines and hypnotic rhythms shaking the ground. 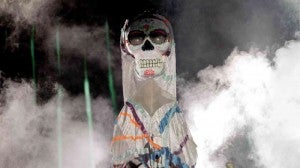 A FAN in a personal spooky-skull tent

The crowd couldn’t be more different at the second stage area. The atmosphere was relaxed, and there was a faint smell of weed in the air, which Kjwan frontman Marc Abaya sensed midway through his set. “I can tell that that is the good kind,” he jested.

Most of the revelers over there seemed content sitting or lying on the ground, listening to indie bands—Maude, Techy Romantics, Run Manila, Taken by Cars …

Other acts that performed at 7107 were Sponge Cola, Rocksteddy, Abra and Loonie, Kid Ink, Luciana, Natives, The Asteroids Galaxy Tour, Immerze, She’s Only Sixteen and Pulso. 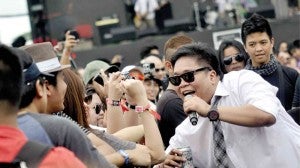 The event likewise drew a good number of spectators who flew in to see the RHCP perform. “We have a lot of people from Singapore, California, and a handful from Europe and Australia,” producer Mike Pio Roda told the Inquirer on Saturday.

For events held in vast open spaces, weather is among organizers’ biggest concerns. Fortunately, 7107 revelers enjoyed good weather throughout—warm and sunny during the day, nippy and breezy at night. 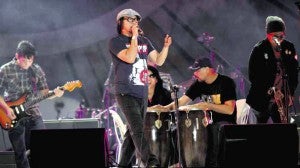 The young and stylish came out in their best music fest garb—usually a combination of crop tops, tanks, denim cutoffs, swim wear, flower headbands. (If only one of your ankles or armpits could be seen, you were likely overdressed.)

Turned out, fashion was as big a component of the scene as the music itself. In fact, some youngsters seemed more preoccupied with parading their gear than checking out the performers onstage.

The afternoons were spent mostly for lounging, sunbathing or taking leisurely walks around the 28-hectare event area. The nights, needless to say, were about booze, cigarettes, weed … and then some more of it. And music, music, music. 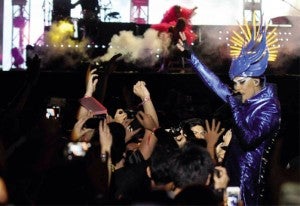 LUKE Steele of Empire of the Sun

You wanted to dance silly? Some DJ was dispensing head-numbing bass lines from the main stage. If you were lucky, you might sight some celeb doing moves best left to characters in “The Matrix.”

You wanted to bang your head and scream your brains out? Kjwan’s Marc Abaya over at the second stage was pouring beer all over his face and dropping F-bombs left and right.

It was all up to you.

Read Next
War brewing between industry stalwart, brazen newbie
EDITORS' PICK
What to watch out for when selecting a video surveillance solution
House energy committee chair Arroyo bats for cheap electricity
DOH says COVID-19 cases plateauing, but public shouldn’t be ‘complacent’
23,000 cops to be deployed nationwide for school reopening
Look Through: The fate of impounded stray dogs
Unleash the photographer in you this World Photography Day with vivo smartphones
MOST READ
Sharon Cuneta asks for prayers for friend in ICU who suffered silent stroke
Light therapy could be the answer to your sleep problems
Korina Sanchez reunites with former ABS-CBN co-anchors Julius Babao, Cheryl Cosim
PBA: San Miguel ousts Meralco to arrange finals duel vs TNT
Don't miss out on the latest news and information.