Original Darna was a movie queen 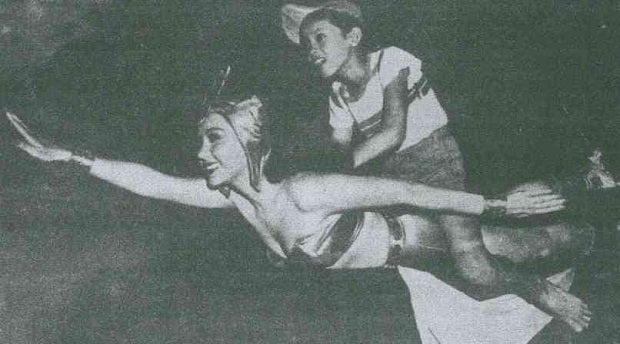 DEL ROSARIO. The premier actress originated the iconic role in 1951.

Now that Angel Locsin has been tapped to star in the latest “Darna” incarnation on TV, it’s timely for us to recall the life and career of the movie queen who originated the role of Darna in the 1950s—Rosa del Rosario:

Rosa was the seventh of 13 children born in Manila to US Army Lt. Frank Stagner and Aquilina del Rosario. Already statuesque at 13, she wanted very much to join her elder sisters, Tina and Norma, in the movies, but they advised her to first learn how to speak Tagalog well.

After months of learning under Lazaro Francisco, she was cast by Malayan Films producer-director Jose Nepomuceno in the film, “Anak ni Satanas,” as the first love of the gangling 15-year-old six-footer, Regidor dela Rosa, who was the nephew of actor Gregorio Fernandez.

The two hit if off so well that, for their next movie team-up in “Ligaw na Bulaklak,” Nepomuceno renamed the youngsters “Rogelio dela Rosa” and “Rosa del Rosario.”

The movie was cited as the Most Outstanding Philippine Film of 1932. For her part in the movie, Rosa was paid P500, but Rogelio got only P100—“because I was the sister of an actress,” Rosa proudly explained.

Early in her career, she was already making waves when she agreed to make the film, “Lantang Bulaklak,” a prequel to the highly successful “Ligaw na Bulaklak.” It was about the sad plight of a woman who loved unwisely.

After her first talking picture, 1934’s “Doktor Kuba,” Rosa made the movie, “Mag-Inang Mahirap,” which was chosen Outstanding Movie of the Year.

Del Rosario was chosen Actress of the Year in 1940 for her two pictures, “Buena Vista” and “Huling Habilin.”

When World War II broke out, Rosa, who was an American mestiza, was in Hollywood, where she played the seventh wife of the King in “Anna and the King.”

When the war ended in 1945, Rosa returned to the Philippines, where she resumed her career with such big movies as 1947’s “Bakya Mo, Neneng,” opposite Leopoldo Salcedo, and “Himala ng Birhen,” with Rogelio dela Rosa.

But, the biggest hit and most important movie of her life was directed and produced by Fernando Poe Sr. (her former costar in “Zamboanga”). The film was “Darna,” released by Royal Productions on May 31, 1951, and shown at the Clover theater in Manila. Also in the cast were Ben Perez, child stars Mila Nimfa and Manuel Ubaldo, featured star Cristina Aragon (as Valentina), as well as character actresses, Elena Mayo and Leonora Ruiz.

Since then, there have been more than a dozen “Darnas” including Vilma Santos, Anjanette Abayari—and even Dolphy! But, there’s nothing like the original—Rosa del Rosario!