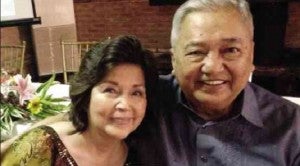 ROA AND RODRIGO. So in love, despite the “advancing” years.

The senior couple has been featured on many other shows after their surprising (for some, even “shocking”) revelation that they loved one another and were going to get married later this year, but “Wagas” was the first production to do a sort of docu-dramatization of their unique “senior” love story, with Jaclyn Jose portraying Boots and Allan Paule depicting King.

The production was well-intended—but, right off the bat, a significant problem presented itself: Despite her best efforts, Jaclyn ended up portraying herself more than Boots. Jaclyn did try to make her portrayal “nicer” and softer” than her usual “edgy” persona, but we still saw her, not Boots.

This is a common problem when popular stars portray well-known personalities who are quite different from them: The portrayer’s distinct personality obtrudes, and the “personified” celebrity’s very different character fails to convincingly come through.

Some years ago, for instance, the mild Piolo Pascual attempted to portray the volatile Ninoy Aquino—and, expectedly, he failed to measure up. In both the Piolo-Ninoy and Jaclyn-Boots instances, not just insufficient thespic skills and insights but also wrong casting decisions are the major culprits that make convincing portrayals difficult, if not most unlikely.

We trust that, in future, directors take much greater pains to suit the actor to the character, not the other way around, so that the portrayed persona convincingly emerges. Example of this successful thespic transformation abound, like Meryl Streep’s serial successes as Margaret Thatcher, Julia Child—etc.!

In these instances, the portrayed characters and their depicters are well-known, but the actors strive mightily to “disappear” into their assigned characters, and viewers are compellingly convinced. Little such “convincing” happened on “Wagas” last Feb. 1, so we trust that the necessary lessons have been learned.

As for Allan Paule, his portrayal of King Rodrigo came off better—but, he still couldn’t “get” King’s innate wit and upbeat bonhomie, and came up with a rather dour and lethargic performance. Perhaps the problem was the fact that Allan is much younger than King, so he focused too much on looking and acting “old”—not realizing that while King may be in his 70s, he still lives life with a lilt—and lots of laughter.

Aside from the less than convincing lead portrayals, the “Wagas” episode on Boots and King was a viewing treat, because the “senior fiances” themselves were extensively featured by way of interviews and performance clips. Viewers were charmed and inspired to see them so in love, despite their relatively advanced or “advancing” years!