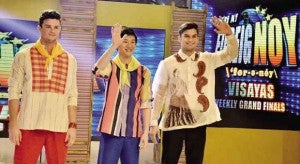 While we were watching the grand finals of “It’s Showtime’s” “That’s My Tomboy” tilt recently, we wondered what GMA 7’s “Eat Bulaga” was doing to compete with the admittedly popular special event. So, we tuned in to “Eat”—and found that, among other things, it had whipped up its own special competition for the nonce, and it too was a unique and viewer-drawing lulu:

A tilt for and about young-adult male foreign residents of the country who knew some Tagalog, and could even sing and dance Pinoy! The fun and one-of-a-kind tilt was titled “You’re My Foreignoy,” and it featured five goodlooking gents from a wide range of countries.

Tilts and features like this are up our alley, because, on “Two for the Road,” we also thought up features and interviews that showed how foreigners loved the Philippines enough to learn its language and assimilate its cultural orientation.

That was our way of “subtly” reminding some “colonially”-minded viewers that they didn’t have to ape foreign lifestyles to feel at par with everyone else on a “global” level. Hey, if some foreign residents of the country bother to learn how to speak Pilipino like natives, we should have something going for us, right?

One particular “TFTR” telecast that made a big impression on viewers in this regard was our panel discussion with five expats who spoke Pilipino very well. To prove its key thematic point, the entire show was conducted in Pilipino, and our foreign guests more than kept up with the most instructive conversation!

The guests, on “That’s My Foreignoy” were less proficient Pilipino speakers, but they still delighted viewers with the way that they handled “reverse-nosebleed” challenges—like mouthing multi-syllabic Tagalog words and phrases!

They even sang local pop tunes, and one of them romped off with the title with his well-rehearsed and enthusiastic version of our “Maglalatik” folk dance!

“Eat Bulaga” should be credited for its very creative way of handling the potentially viewer-distracting competition provided by “Showtime’s” recent “That’s My Tomboy” finals.

Fierce competitiveness for more viewers is par for the TV course, but it’s great to see that some players are choosing to cope with it—not “savagely” but creatively.

Indeed, GMA 7 has shown of late that it can be rather clever and witty in the way that it counters its rivals’ competitive threats and gambits. Earlier, we were tickled pink when “Eat” matched “Showtime’s” “Tomboy” tilt with its own competition, which it grinningly titled “That’s My Tambay!”

It featured jobless contestants who showed that they weren’t just lazy palamunin, but were talented and entertaining in their own right. Some daily and weekly winners found work as entertainers, while others were able to land other jobs—an upbeat outcome all around! And now, “You’re My Foreignoy” has made witty waves of its own!

Is there a hidden but very creative gnome at GMA 7 who keeps coming up with these bright ideas? Take a well-deserved bow!

NCR’s COVID-19 cases rise by 65% in past week; Pateros, Malabon at critical risk