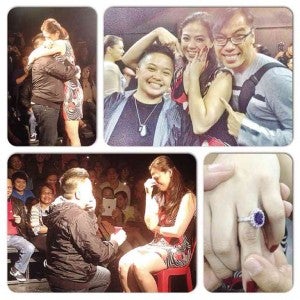 The play “Kung Paano Maghiwalay,” ironically about breaking up, was supposed to be a one-night, fund-raising performance for the 55th anniversary of the Department of Speech Communication and Theater Arts on Friday.

That’s what Liza was told.

Towards the play’s end, co-star and girlfriend Aiza went down on her knees and presented a diamond-and-sapphire engagement ring to Liza.

“Just like the ring of Princess Diana and Kate Middleton,” Liza later said.

Among those in the audience at the Teatro Hermogenes Ylagan in UP Diliman were Aiza’s parents and Liza’s.

“Aiza asked our parents’ permission before proposing to me,” Liza said.

Although a wedding date has yet to be set, Liza said it would likely be in Los Angeles, California, where she lived for six years before coming home to be with Aiza last year. Bayani San Diego Jr.