Score for Nicki Minaj: Front row next to Anna Wintour 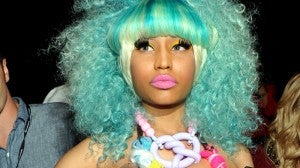 NEW YORK—Move over Renee Zellweger, oh you of the tasteful buff dress and matchy matchy shoes. Nicki Minaj got the front row next to Anna Wintour at Monday’s runway show of your beloved Carolina Herrera.

The multiplatinum singer showed up in a multiplatinum Marie Antoinette wig and technicolor pompom-ed sweater to grab the prime real estate at New York Fashion Week. Rounding out the look for her chat with the Vogue editor in chief was a bright orange mini skirt, neon stockings and pink shoes.

They exchanged smiles before the show but got serious once the models took to the catwalk. On Minaj’s other side was W magazine fashion editor Stefano Tonchi. Zellweger, who usually rocks Herrera designs on red carpets, sat front row nearby.

The Grammy-nominated entertainer, who released her platinum-selling debut “Pink Friday” last year, has evolved from oversexed street rapper to animated R&B-pop singer and a bona fide star. She has a penchant for Barbies, wild outfits and cartoonish wigs.