Boots’ King woos and wins her with humor and poetry 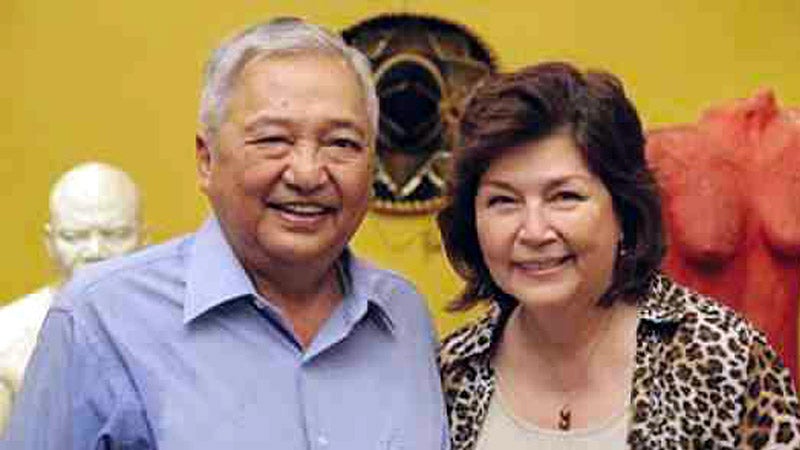 ROA (WITH RODRIGO, LEFT). From widow to bride.

Boots Anson-Roa’s announcement last month that she has gotten engaged to lawyer King Rodrigo surprised many readers, and perhaps even shocked some of them—but, her friends and loves ones are generally less “alarmed” about this new development in the veteran actress’ life.

They’ve seen it coming for a couple of years now, as off-the-record and fresh-from-the-grapevine reports have reached them about the efforts of a number of other senior swains to persuade the much-admired lady to change her status from widow to bride!

The fact that King has succeeded in his quest and troth is a testament to his innate sterling qualities, which include his steadfast perseverance, a poetic flair and a positive and humorous view of life—which could have been the deciding factor in his favor, as far as Boots was concerned.

For our part, we’ve gotten on Boots’ bad side by consistently declaring that anybody interested in courting her has to be at least  a billionaire! Her friends, like Manay Ichu Maceda and Bibsy Carballo, have been “outraged” at our tongue-in-cheek insistence on basic financial “qualifications,” but we have blithely proceeded to draw up a very short list of exceedingly rich and unmarried gents for Boots to “alternatively” consider.

Alas, some of them were too ancient to even be expected to “function”—but, we pooh-poohed their rumored incapacity away by surmising that, as a senior citizen, Boots would be interested in companionship more than anything else!

Whereupon Manay Ichu scathingly shrieked and said that we didn’t know what we were talking about, because all women contemplating a new marriage would expect their ardent “applicants” to at least be able to provide more than just inutile and senile “platonic” or “brotherly” friendship!

There were a couple of other names on our very short list of billionaire prospects who also failed to qualify—not because they couldn’t “function,” but because their, ah, gender choice made it likely that they wouldn’t want to!

Uh, sorry about that, but were our outraged critics absolutely sure that sexless companionship wouldn’t suffice? They absolutely were—so, we sheepishly withdrew our list of basic “qualifications”—!

Well, it’s obvious from Boots and King’s first public appearance together that she’s made a great choice, so we should all celebrate this new chapter in our dear friend’s life—even if our boorishly stringent “financial” requirement wasn’t fully met.

After all, as Boots succinctly twitted us through a mutual friend, “Tell NUT that King may not be a Ford—but, he can a-fford!”

—True enough, the dazzling engagement bling-ring that Boots recently wore when she introduced her fiancé to her friends in media was stunning enough to have made the late Liz Taylor gasp in awe and envy—!

Less frivolously now, the fact that widow Boots and widower King are so obviously and blushingly in love and getting married very soon is a big psychic boost to other unattached seniors who have resigned themselves to living the rest of their lives alone.

If 69-year-old Boots and 74-year-old King can start a new chapter of wedded bliss together, what’s stopping the rest of us from bravely and happily realizing our own tomorrows today? —What indeed?