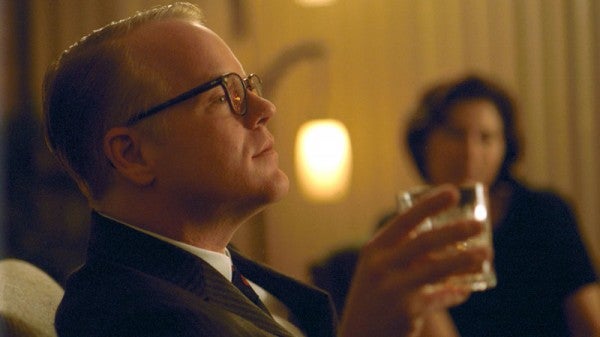 In this file photo provided by Sony Pictures Classics, Philip Seymour Hoffman as Tuman Capote, a one-of-a-kind author sent to Kansas to pen an article about the brutal murder of a family in a small Kansas town that sent shockwaves through the nation in “Capote.” In a medium (movies) that prizes glamour and flash, he offered the opposite: untidy, imperfect, shy, awkward and eminently real people. Despite his outsized talent, he was relentlessly humble. Bennett Miller, his longtime friend and “Capote” director, once called him “a shaman-like actor.” AP

NEW YORK — In a medium that prizes glamor and flash, Philip Seymour Hoffman offered the opposite in film: untidy, imperfect, shy, awkward and eminently real people.

Despite his outsized talent, he was relentlessly humble. Bennett Miller, his longtime friend and “Capote” director, once called him “a shaman-like actor.”

It’s no surprise that he eventually made his way to that greatest loser of all, Willy Loman. In a career peopled by sad sacks, “Death of a Salesman” on Broadway was a pinnacle.

Choosing five great performances from Hoffman’s prolific but too-brief lifespan — ranging from his passionate rock critic Lester Bangs in “Almost Famous” to his nasty rich kid in “The Talented Mr. Ripley” — is an impossibility. He was good in everything.

Here, nevertheless, are a few highlights:

— “Hard Eight”: Hoffman’s least known performance for director Paul Thomas Anderson was also his first. In 1996’s “Hard Eight,” also titled “Sydney,” Hoffman plays a loud-mouthed, mullet-haired craps player who clashes with the more dignified gambler played by Philip Baker Hall. But he’s quickly won over by a ballsy bet, and cheerfully takes to calling him “Big Time.” It’s the scene that began one of the most enthralling actor-director collaborations in recent movies, running through “Boogie Nights” (as a pathetic wannabe pornographer) “Magnolia” (as a dying man’s nurse), “Punch Drunk Love” (as a mattress store owner) and “The Master” (as a cult leader).

— “Jack Goes Boating”: Hoffman’s 2010 directorial debut, adapted from Robert Glaudini’s play, is the film I’m most moved to re-watch after his tragic death. In it, he plays a painfully shy limo driver with the unlikely dream of working for the MTA. It’s the story of an exceptionally ordinary guy trying to improve himself. Everything about the character and the film exudes the kind of downbeat modesty Hoffman prized.

— “Capote”: One occasionally wished Hoffman had more frequently taken on big parts like Truman Capote that more obviously showcased his tremendous talent. In some ways, his most ambitious work went to Broadway: “Death of a Salesman,” ”Long Day’s Journey Into Night,” ”True West.” But though he gravitated more to regular guys, Hoffman’s dapper, brash Capote is a master class in how to play an icon. Such roles are so often a collection of accent and manner — mere impression — but Hoffman’s Capote was a full, soulful portrait.

— “Happiness” — Hoffman had dangerousness in him, too. His peeping pervert in Todd Solondz’s 1998 drama was unforgettably daring. It remains one of the creepiest performances in American movies.

— “The Savages”: In Tamara Jenkins’ 2007 film, Hoffman and Laura Linney play a brother and sister struggling with adulthood and their father’s decline in old age. It feels like the epitome of a Hoffman film: a mix of comedy and tragedy told with subtlety, bone-dry humor and flashes of grace.