For the least of these, our brethren 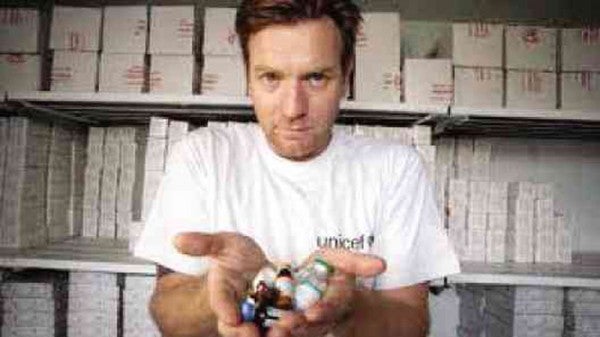 EWAN McGregor hiked for days to deliver vaccines in the Himalayas. www.unicef.org.uk

Quite a number of celebrities have lent their names to important advocacies to make the world a better place, especially for the poorest of the poor. But, we daresay that few have given as much of their time and energy as Ewan McGregor for the Unicef immunization project called the Cold Chain Mission.

Last December on the Solar channel, McGregor was shown hiking for days up and down a seemingly endless series of Himalayan mountain trails to help deliver antimalarial and other medicines to some of the most remote nooks, crannies and crevices in that forbidding landscape.

Even more impressively, after the challenging mission had been arduously completed, the star with a heart of gold and a body of seemingly tungsten steel was all smiles and raring to keep helping the poorest of the poor—next time, in the Congo!

A particularly striking part of his group’s Himalayan mission was the fact that it carried, along with its other medicinal cargo, one vial of a different serum purposely intended for a specific child in the most remote village of all that the mission was able to reach.

The backstory there turned out to be the fact that the child had been overlooked a couple of years ago, when all of the other children in the village had been inoculated and  immunized, and the group was so worried that the un-immunized  child could fall ill to a number of dreaded diseases, so she was included in the follow-up mission some years later!

For a big advocacy to keep track of its beneficiaries so personally is moving proof of the genuine concern and care that it has for the least of these, our brethren, and we are humbled by it.

The child’s story reminds us of the biblical parable about the shepherd who drops everything to look for his one missing sheep. He may have 99 others, but he’s fully focused on searching for this missing lamb, because the fact that it’s lost has brought it closest to his heart of hearts!

Mind-boggling
Ditto for McGregor, who as a famous film star certainly cannot be expected to think of just one child in the remotest part of the world, and go out of his way to save her from potential danger. And yet, that’s precisely what he does, and it boggles the mind to meet a celebrity who hasn’t forgotten to be so acutely, devotedly humane.

Would we hike for two full days and nights just to help a little child we don’t even know? Sadly but realistically, we shake our head. All the more reason then to marvel at Ewan McGregor, the very antithesis of the smug and self-centered stars we know only too well.

What has made him so unique? Now can we and other celebrities and noncelebrities imbibe more of the total selflessness that he so inspiringly embodies?

The following week on Solar, another documentary provided even more inspiration as it showed McGregor’s team continuing with their Cold Chain Mission in the African Congo, where the conditions and challenges were just as seemingly insurmountable and dire.

Again, their cheerful heroism shone through, and they made it all look so “easy” that viewers finally understood what was happening: It definitely wasn’t easy, but once McGregor and his team had decided to focus not on themselves but completely on the poor and obscure people they wanted to help, the “impossible” task became—eminently, heroically achievable.