Shamcey Supsup among those picked by ex-Miss Universe, pageant expert to win 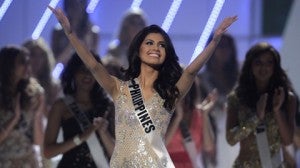 MANILA, Philippines — Binibining Pilipinas Shamcey Supsup’s chances of bagging the Miss Universe title this year are looking good, according to a former winner and a former national pageant director who has produced formidable delegates.

The 89 delegates introduced themselves and paraded in identical swimsuits and evening gowns of their choice during the event, which was crucial in selecting the semifinalists who would battle it out during the coronation ceremonies on Tuesday (September 13).

French Ines Ligron, the former national pageant director for Japan, who is now involved in training Malaysian representative Deborah Henry, included Supsup in her “best three” list, along with her ward and Australia’s Sherri-lee Biggs.

Glebova, meanwhile, also cited Ukraine’s Olesia Stefanko, Luo Zilin of China, Aruban Gillian Berry and Adriana Dorn from Nicaragua among the first five delegates who caught her attention and would likely land in the semifinals. She posted her list on her Facebook fanpage (www.facebook.com/MissUniverse2005).

She recently added new names to her list, which now also includes the delegates from Greece, Trinidad and Tobago, Puerto Rico, Colombia, Malaysia, Indonesia, Venezuela, Peru and Costa Rica. She is torn between the representatives of Thailand and Mexico as to who shall complete the Top 16.

In her blog (inesligron.com/blogroll), Ligron considered Supsup, Biggs and Henry the “full package” and cited the three for their “amazing body, great catwalk, fresh face, charismatic aura, stunning dresses,” and for being naturally beautiful and elegant on stage.

Ligron rounded out her final five choices for the title this year with Mexico’s Karin Ontiveros and Sheldry Saez from Panama. She also cited Luo, Stefanko, her compatriot Laury Thilleman, and the delegates from Angola, Argentina, Greece, Netherlands and Venezuela.

Only Supsup figured in both Glebova and Ligron’s top favorites for the crown. The other delegates who are included in both experts’ expanded lists are the representatives from Australia, Mexico, Malaysia, China, Greece, Ukraine and Venezuela.

But before the presentation show, Supsup already created a splash in Sao Paulo when she was chosen to speak in one of the pageant’s official events. In “Operation Smile,” Supsup joined reigning Miss Universe Ximena Navarrete, Luo, Venezuela’s Vanessa Goncalvez and host delegate Priscila Machado to meet media men. There, she reportedly dominated the interview and showed a commanding grasp of the project’s goal of putting smiles on children born with clefts.

But months of training honed Supsup into becoming a formidable international contestant. Her predecessor, 2010 Miss Universe fourth runner up Venus Raj, noted Supsup’s “dramatic” improvement during the course of her preparations.

During Supsup’s send-off last month, Raj declared: “Once she is given a task, she really does her best. Whether it’s for the family, business or school, Shamcey gives her all. And for Miss Universe, she has no other choice but to give her best, and to be the best.”

Supsup’s batchmates in this year’s Binibining Pilipinas pageant, meanwhile, were impressed with her presentation last Thursday.

“Her performance was breathtaking. It’s just her second pageant, but who would ever guess that? I have high hopes for her. I know she will deliver (on pageant day),” second runner up Mary Jean Lastimosa told the Philippine Daily Inquirer in a phone interview.

“All the training and hard work that we shared together paid off. I am praying for her. The Filipinos are praying for her. She’s been a sister to me. I will always be willing to help her,” added Lastimosa, one of Supsup’s closest friends who had been very vocal about her support for her fellow Mindanaoan.

Binibining Pilipinas-Tourism Isabella Manjon, meanwhile, said “I find her more confident and enjoying what she’s doing.” She also said in terms of competition, Supsup should watch out for Luo.

But when all is said and done, Lastimosa said Supsup’s toughest competitor would be herself. “Whatever she’ll do will make her or break her. But I know her and she’s a fighter. She’ll do good,” she explained.

Before she left the country last month, Supsup assured Filipinos she would not fail them. “One of my greatest traits is discipline. I have shown this throughout my education. I have shown that given a responsibility, I will do everything, whatever I can, to be the best.”

It has been 38 years since the Philippines last took hold of the Miss Universe title when Margarita Moran won in Greece in 1973, only four years after Gloria Diaz became the first Filipino woman to be proclaimed Miss Universe in 1969. In 1999, Miriam Quiambao came close to being the Philippines’ third Miss Universe winner when she placed second to Botswana’s Mpule Kwelagobe in Trinidad and Tobago.

The 2011 Miss Universe pageant will be seen on Asian cable channel Star World at 9 a.m. on Tuesday. ABS-CBN airs the show at 9:30 a.m. Tony Award-winning Filipino singer Lea Salonga will be one of the pageant’s judges.

Read Next
SpongeBob in hot water from study of 4-year-olds
EDITORS' PICK
EuroMillions Superdraw: A lottery draw unlike any other is coming to the Philippines
Smart releases Hyun Bin’s second TVC
Water remains our saving grace right now
‘Justice will be done,’ Duterte assures as he vowed probe on Jolo incident to bare ‘truth’
DOLE: Return of OFWs’ remains from Saudi to be ‘delayed,’ deadline moved to ‘early next week’
Current dominant strain of COVID-19 more infectious than original—study
MOST READ
BREAKING: Duterte signs anti-terror bill into law
Locsin warns of ‘severest response’ if China’s army drills in SCS ‘spill over’ to PH domain
Duterte tells military: No other president looked at you the way I did
‘Very timely, historic’: Senators laud passage of anti-terror bill despite ‘pressures’
Follow @diyarista on Twitter
Don't miss out on the latest news and information.