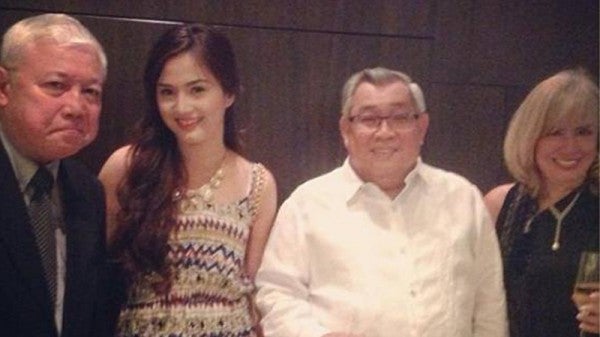 Deniece Cornejo (second from left) poses with GMA Chairman and CEO Atty. Felipe L. Gozon (third from left) and two others, one of whom she identified as “lolo rod.” PHOTO FROM CORNEJO’S FACEBOOK ACCOUNT

MANILA, Philippines—GMA 7 late Sunday issued a statement denying the claim of Deniece Millet Cornejo, who has accused comedian TV host Vhong Navarro of attempting to rape her, that GMA chairman and CEO Felipe L. Gozon is her “lolo,” or grandfather.

Following is the statement issued by GMA 7 Corporate Communications Department in a tweet:

“This is to clarify that the complainant involved in the Vhong Navarro incident is not related to GMA Chairman and CEO Atty. Felipe L. Gozon. From the moment GMA News learned of the story, it sought the side of Vhong Navarro. Chito Rono, his manager, gave GMA News a written statement, which was aired yesterday (Saturday). Today, GMA News aired an interview with Navarro’s lawyer Atty Alma Mallonga. The report about the alleged attempted rape was based on the blotter filed at the Investigative Section of the Southern Police District where Vhong Navarro was taken after the incident. Other news organizations also reported it.”

Cornejo posted on her Facebook account a photo of herself with Gozon and two others with the caption: “with my lolo rod of GMA7 with lolo att. Gozum (referring to Gozon).” While some believed she waS Gozon’s granddaughter, others were incredulous. One commenter said: “Weh!! D nga,,:) (Really…)

Navarro on Sunday denied the accusation that he raped Cornejo in a condo unit in Fort Bonifacio Global City. Cornejo said she called for help through her cell phone, prompting her companions to come to her rescue and maul him.

Navarro said in an interview on the Sunday talk show “Buzz ng Bayan” that there was an attempt to blackmail him.

Cornejo had filed a complaint of attempted rape against Navarro at the Southern Police District.

In her Facebook page, 22-year-old Cornejo, a commercial model, on Sunday night posted a Biblical verse, apparently to stress that her complaint had a basis: “Then you will know the truth, and the truth will set you free – John 8:32.”

Some four hours later she posted another quote: “Everyone wants nothing but honesty yet caught lying most of the time. truth hurts and no matter how painful it is, face it with dignity. –cath.”

Many of the commenters on her posts were haters and called her names.—Rick Alberto