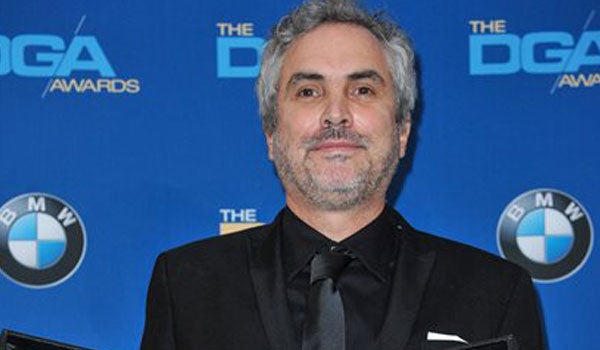 Alfonso Cuarón poses in the press room of the the 66th Annual DGA Awards Dinner at the Hyatt Regency Century Plaza Hotel on Saturday, Jan. 25, 2014, in Los Angeles, Calif. AP

LOS ANGELES — Alfonso Cuaron has won the top film honor from the Directors Guild of America for “Gravity,” giving his space saga an edge on the journey to the Academy Awards.

Saturday’s prize makes Cuaron a near shoo-in to win the best director Oscar on March 2. The Directors Guild recipient nearly always goes on to claim the same prize on Hollywood’s biggest night.

In the 65-year history of the DGA awards, the winner has failed to also take home the best director Oscar just seven times. Ben Affleck won the guild award last year for “Argo” but was denied a best director nomination at the Oscars. However, like many DGA winners, “Argo” went on to win the best-picture prize at the Oscars.

While accepting his trophy, Cuaron recalled looking at satellite images of earth from space.

“What you cannot see from up there is this bizarre experiment of nature that is the human experience,” said Cuaron, a first-time DGA winner. “That experiment is what directors try to sort out with our films. Thankfully, that experience is as diverse as the films as these filmmakers make.”

Jehane Noujaim won the documentary prize for “The Square,” which was acquired by subscription service Netflix last year and depicts the tumult of the Egyptian Revolution beginning in 2011.

“I’m very humbled and very grateful,” said Noujaim, whose previous documentaries include “Startup.com” and “Control Room.” ”This film is the most deeply personal film I’ve made, watching my country change before me when I never thought change was possible. It redefined my understanding of what was possible.”

Steven Soderbergh, the “sex, lies, and videotape” and “Ocean’s Twelve” filmmaker, won the TV movie and miniseries prize for HBO’s “Behind the Candelabra,” which recounted the relationship of Liberace and his lover Scott Thorson.

Soderbergh, who once served as a DGA first vice president, was also honored with the Robert B. Aldrich Award for his service to the guild.

“Sometimes you feel empty, and you’re just overwhelmed and you look and see how willing your team is to carry you forward, and you get an extra burst of energy, and you keep going,” said Soderbergh while accepting his first-ever DGA award.

“Breaking Bad” mastermind Vince Gilligan was also honored with his first DGA award for directing the series finale of the AMC drama.

Other than the Writer’s Guild Awards on Feb. 1, there are no major awards before the Oscars. Hollywood’s high season goes quiet for a few weeks as several thousand members of the motion picture academy have the last word with their balloting.

‘The Square’ among early winners at DGAs

With SAG win, ‘Hustle’ has Oscar look of ‘Argo’