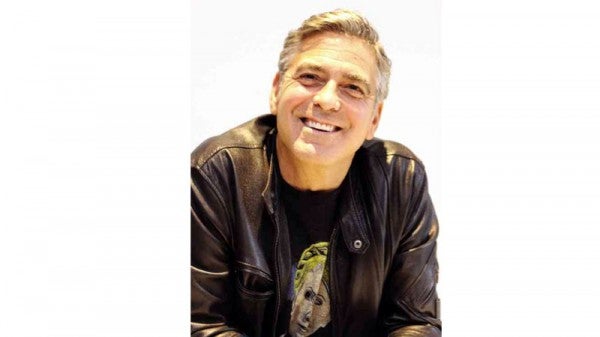 CLOONEY. “When you get older, you’re wiser about everything.” RUBEN V. NEPALES

LOS ANGELES—George Clooney pulls pranks even on his dad, Nick Clooney. In our recent chat, the famous prankster told us how he pulled one on his 80-year-old father, who has a cameo as an older version of his war hero character in “The Monuments Men.”

“My father is the last I shot in the movie,” George began, his eyes lighting up—he obviously relishes playing tricks. “I showed a rough cut of it to him when we were in Italy. In the shot, he walks off up the stairs and into the light of the church. Then, it goes to black. The first thing that comes up is a card that says, ‘In loving memory of Nick Clooney.’ He’s like, ‘What’s wrong with you?’ I go, ‘You know, it’s a long time till the movie comes out. It’s much cheaper to take this out than it is to put it in.’ He thought that was pretty funny.”

George also played a prank on Matt Damon, who stars in “The Monuments Men.” It’s the same trick that George, who cowrote and directed the film shot mostly in Berlin, earlier pulled on Matt when the latter was a guest in his Italian villa.

The multihyphenate recounted, “When Matt got to Berlin, he goes, ‘I got a trainer and a chef. I’m going to lose some weight while I’m here.’ So, every three or four days, I had the wardrobe girl take his pants in, tighten the pants by a quarter or an inch. In about a month, his pants were way too tight for him. And every day, he was eating only lettuce.” With a mischievous grin, George quipped, “And that was good fun to watch him suffer.”

When we told George that John Goodman said in our interview that shooting “The Monuments Men” was one of his most enjoyable experiences, he replied, “You know me pretty well now. I enjoy what I do, and I have fun with what I’m doing. I was very prepared so that we were able to enjoy ourselves. We worked fairly short hours.”

“I’ve known John a long time,” he said of the actor who joins Bill Murray, Cate Blanchett and Jean Dujardin in the cast of the film about a World War II platoon hunting down and recovering artwork stolen by the Nazis. “We did ‘Roseanne’ together years ago. He and Bill are dear friends. They would come to the set when they had days off and just hang out or help out sometimes. If it was raining, we were grabbing camera boxes. If you looked over, Bill Murray was picking up camera boxes and carrying them down. It felt like a family, and everybody was happy. I think that was reflected in the film.” 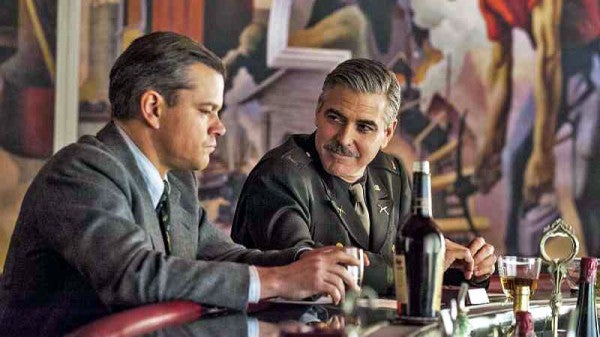 DAMON AND CLOONEY. Reunite in “The Monuments Men.” AP

Hollywood’s elusive bachelor, so far relationship-free since he and Stacy Keibler parted ways in July last year, was asked how his appreciation of women evolved now that he is in his early 50s. “Boy, that question could get me in so much trouble,” he replied with a chuckle. “A 15-year-old boy looks at women a little differently than a 20-year-old boy. You know, I have a great appreciation for women. They’re a huge part of my life.

“I really couldn’t say that I appreciate something more in women. I appreciate people more. I understand them better. As I get older, I understand my parents infinitely better. The decisions they made at the time that I thought were terrible, I would make those same decisions now. When you get older, you’re wiser about everything. You figure some stuff out. But, I couldn’t categorize it as about women.”

What is he looking for in a relationship? “What I would say is, all of us in life are looking for happiness, peace and joy,” came Mr. Congeniality’s reply. “I certainly have been in search of that in my life over the years—and I will always continue that search in some way, in one way or another.”

An interview with George is always a mixture of humor and serious stuff. Asked about the identity of the woman with a blonde braid that was printed on his T-shirt (which he wore under a leather jacket), George explained, “Oh, this is about Yulia Tymoshenko. She was the prime minister of Ukraine. She is a political prisoner. The EU, when they were going to make a deal with Ukraine, one of the stipulations was that they set her free. She’s in jail because she opposed the prime minister, who is having his own troubles there. I don’t think enough people talk about things like that. She’s certainly guilty of no crime. I like to wear shirts that help bring attention to things that don’t get attention.”

George is looking forward to mid-February, when he finishes shooting Brad Bird’s much-anticipated “Tomorrowland,” which also features Judy Greer, Hugh Laurie, Tim McGraw and Kathryn Hahn. He started filming his scenes in the mystery/sci-fi in Vancouver, Canada in September. The day after our talk, George flew to Valencia, Spain, to resume shooting “Tomorrowland.”

“I’m not allowed to talk about ‘Tomorrowland,’” George said, but he added, “I can tell you it’s a very big movie. Brad is a wonderful guy and director. So, I have every faith that it will be good.” He confirmed that the film is connected to Disneyland’s Tomorrowland “but in a weird way, which is odd. It’s science fiction set a little bit ahead of now. It has a beautiful script.”

On the theme raised by “The Monuments Men” about risking human lives to rescue art masterpieces, George commented, “I don’t think I would run into a burning building to pull out any object. A family member or maybe your dog but not an object. So, in a weird way, that was the difficulty of telling this film—you have to try to explain to people that it’s not the piece of art; it’s the culture.

“I have a US flag of my Uncle George,” George continued. “It was over his coffin. They folded it and gave it to me. I was very close to him. I have this flag at home. But, if the house were burning, I wouldn’t run in to get that flag.

“But, if I were on the street and there was a bunch of neo-Nazis standing on top of an American flag and setting it on fire, I might very well risk my life to make them stop doing that—because of what it represents. Grant (Heslov, his cowriter) and I kept focusing on the idea that this is the timeline of our culture, and that’s what’s important about saving it and not letting it go away. That was what we thought was the important part of the story. Because when you’re going to write a movie about saving art, you can see every studio going, ‘Oh my God, a movie about art! Kill me!’ So, we had to make it more about the culture.”

But, if he can only save one object in a dangerous situation, what would that be? “That’s a tough call,” he answered. “What’s art? It’s something personal to you. I have a binder with a collection of handwritten letters from Paul Newman, Walter Cronkite, Gregory Peck and people that I’ve become pen pals with. I would try to save that over anything I own, because they mean so much to me. I had such great relations and fun times with them!”