Angel Locsin is very vocal about her present feelings for ex-beau Luis Manzano. She unabashedly admitted on national TV that she still loves him, and wants to be with him. I asked Vilma Santos, Luis’ ever-fab mom, for a comment.

She replied via SMS: “It was quite surprising! But Angel is like family. ‘Di na siya iba sa amin. I’d rather keep quiet for now. It’s up to them… whatever their decision will be, I’ll be happy if they’re happy. Happiness is the most important thing in life.”

Looks like Luis has not just a “Mom for All Seasons” but also a “Love (Angel) for All Time.” 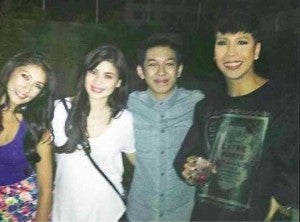 Vice told my “dalaGay,” IC Mendoza, that the hardest scene he did for the movie was the one where he is working in the  rice field. Vice took quick cold baths (using a tabo) between takes, since he was portraying female and male characters alternately—only to learn that there was a hot shower nearby.

Kudos, Vice! You’ve shown us that talent knows no gender. You managed to have the best of four worlds! 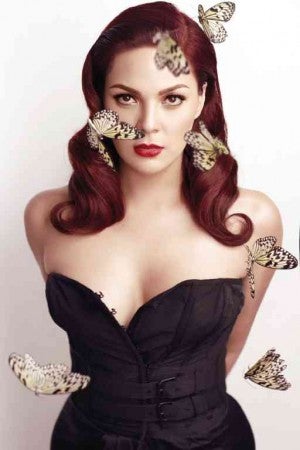 Too bad that after KC Concepcion’s impressive portrayal as a stripper-on-the-run in “Boy Golden: Shoot-to-Kill,” she has gone on hiatus in New York.

Based on her Instagram account, she’s off on new adventures. With her charisma, she can make it big anywhere she pleases. She is definitely out of the shadow of her parents, Sharon Cuneta and Gabby Concepcion.

But, for some reason, her projects lack a certain missing ingredient that the Sha-Gabs love team had in abundance.

Hopefully, when KC returns, the “oomph” she has displayed in her MMFF entry will be further enhanced.

Mi amigo muy simpatico, Chad Borja is in his element. “It’s my busiest Valentine season ever,” he gushes. “So my V-Day celebration with my wife Emy will have to be a belated one.” 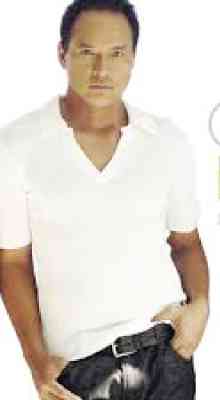 Cupid has filled up Chad’s calendar:  He performs with the LA All-Star Band at the Music Museum on Jan. 31 and  Feb. 3; the Hitmen at Solaire Feb. 4; Joey Albert at the Samsung Hall, Feb. 5; Greg Karukas and Peter White  at Pagcor Tagaytay, Feb. 7.

On  Feb. 13  and 14, Chad joins fellow The New Minstrels alumni and former Circus Band members at PICC for “The Greatest Hits Reunion.” This show goes to the SMX Convention Center in Davao on Feb. 15.

A jazz aficionado, the Cebuano crooner is always excited when he gets a chance to perform with international jazz stars. “I learned many things from them: proper phrasing, being a bit over or under (for sharps or flats) which can

also be fine, as long as the emotions are there.”

He adds: “I also learned that during recordings, the practice take is always the best. (Japanese jazz artist) Yutaka Yokokura tricked me on this many times! Plus, shouting or unnecessary ad libs should be avoided. And artists should be satisfied with the sound onstage. The audience will feel that positive energy.”

After Chad’s battle with the big C, he’s definitely back with a bigger C … Concerts galore!

Dinagyang Festival. Be where the action is at Amigo Terrace Hotel (Iznart corner Delgado Streets).

Fun-filled activities kick off on Jan. 24 with a DB drag competition of modified luxury cars from 10 a.m. to 12 noon. From 4 p.m. to 9 p.m., they will have a photo booth, live entertainers and a Dinagyang Dance Beat.

On Jan. 25, The Kotokamos Reggae Band performs from 3 to 9 p.m. An all-night party follows at Euphoria with top DJs from Manila, featuring Leandro Zyco and the Patikerosto.

On Jan. 26, marvel at the beauty of Iloilo by joining the hotel’s  LSI Signature and Heritage Tours which includes a visit to Miag-ao Church (a Unesco World Heritage Site), pottery making, Tinuom sa Cabatuan with breakfast and more (http://amigoterracehotel.com).