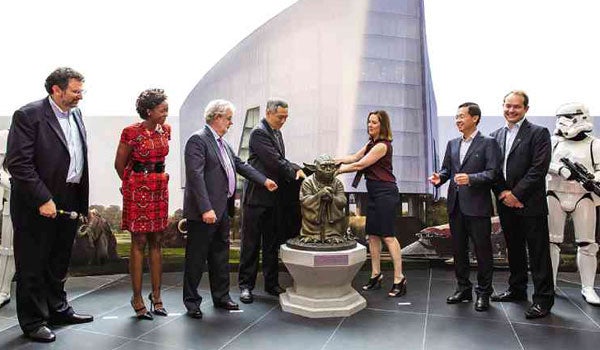 SINGAPORE—“The last time I was here, I was offered a hard hat,” Lucasfilm general manager David Anderman said Wednesday during a round-table discussion with Southeast Asian media representatives gathered for the grand opening of this island-state’s newest landmark. 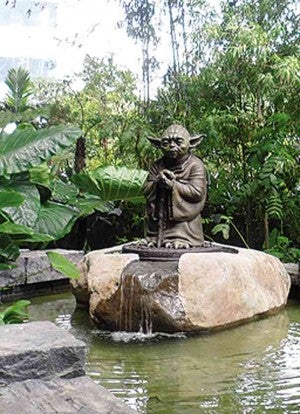 YODA in the garden. emmie velarde

That was just over a year ago. Now, The Sandcrawler, a world-class film production facility, stands like a futuristic vision in Singapore’s Fusionopolis (One North) business park. It is an imposing modern glass-and metal rendition of the desert-scavenging vehicles introduced in “Star Wars: A New Hope,” fourth in the film franchise series that originated “in a galaxy far, far away.”

Thursday morning, legendary filmmaker/producer George Lucas, who created that galaxy, unveiled a statue of the Grand Jedi Master Yoda—endearing oracle with a perplexing speech syntax—in the odd-shaped foyer by way of inaugurating the building, which has won six architectural awards so far.

Minutes prior, Lucas thanked the government of Singapore for “so clearly delivering on its promise” of support. He said the building was a symbol of the active collaboration between 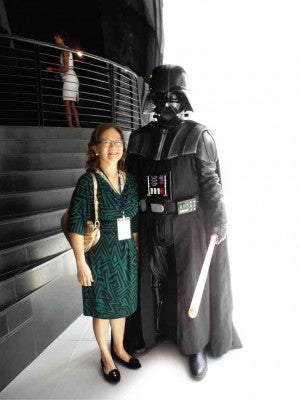 Singapore and Lucasfilm in nurturing and promoting the “talent ecosystem” in the digital entertainment arts.

The Sandcrawler will be the regional headquarters of Lucasfilm Singapore, ESPN Asia Pacific and the Disney Company, which bought Lucasfilm in late 2012 for US$4.05  billion.

Lucasfilm Singapore was launched in October 2005 and has worked with schools and several companies to promote digital entertainment. It promptly launched major technical training programs, connecting talent with industry veterans at the Lucasfilm base in San Francisco, California.

Aside from the “Star Wars” and “Indiana Jones” franchises, Lucasfilm, founded by Lucas in 1971, is renowned for leadership in developing special effects, sound and computer animation for film. 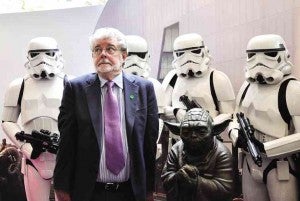 LUCAS with Stormtroopers (back) and Yoda at the lobby of the new production facility. AFP

After 9/11, Lucas said, “It was hard to bring talents into the United States—and a lot of them were from elsewhere outside of the US.”

The Singapore facility, Lucas said in his address, had since produced “amazing” output by artists based here, comparable to the quality of work that comes out of the California headquarters. “I mean,” he said, “no one can tell the difference.”

Sandcrawler, he added, was the “culmination of many years of hard work” and “everything I hoped it would be.”

Lucas, 68, announced his retirement after concluding the Disney deal, saying he was “completely confident” that Disney would “take good care of the franchise I’ve built. At the same time, I look at it as … investing in Disney, because that’s my retirement fund.”

(In September 2013, Forbes estimated the filmmaker’s net worth at $4.2 billion.)

Besides, he recalled on Thursday, “Everybody said the first ‘Star Wars’ was a film that Disney should have made.”

He personally selected eight-time Oscar-nominated Kennedy— one of the most successful and respected producers/executives in the film industry—to take over the reins of Lucasfilm. “Disney is the best company to take ‘Star Wars’ into the future,” Kennedy said on Wednesday. “We couldn’t be in a better home.”

Kennedy joined Lucasfilm in 2012. Prior to that, in 1982, she co-founded Amblin Entertainment with Steven Spielberg and Frank Marshall, whom she would marry in 1987. In 1992, the couple founded The Kennedy/Marshall Company and proceeded to produce several blockbusters, among them: “The Sixth Sense,” the four “Bourne” movies, “The Curious Case of Benjamin Button” and the critically acclaimed “Lincoln.”

On Wednesday, she told entertainment journalists from across the region: “When we opened our Singapore studio in 2005, the local digital production landscape looked very different. It was relatively small, with a limited talent pool and virtually no visual effects work being done. Through the efforts of the Economic Development Board, the industry has grown rapidly, and Lucasfilm has done its part in helping that effort. By investing in local talent, we’ve been able to significantly grow our Singapore studio into a world-class digital production facility.”

The Jedi Masters Program was born in Lucasfilm Singapore in 2008. It gives trainees (recruited from around the world) access to the proprietary curriculum, toolsets and patented technologies of Industrial Light Magic— the American Academy Award-winning motion picture visual effects division of Lucasfilm, founded in 1975. 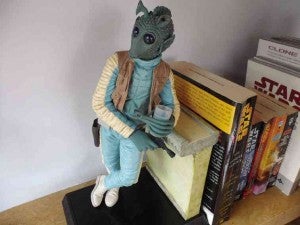 Among the recent notable projects that the Singapore team has participated in are the Oscar Award-winning (Best Animated Feature, 2011) “Rango” and “Pacific Rim” (2013).

Loong said his government was prepared to build and nurture— through infrastructure and whatever support system may be needed—“a vibrant community of talents in the entertainment arts.”

Lucasfilm Singapore currently has over 360 employees, of which 130 are Singaporeans and trainees from around the region, including the Philippines.

The Sandcrawler—designed by Aedas Architecture and owned/managed by Lucas Real Estate Singapore—has 38,000 square meters of construction, including garage and service areas; and 22,500 square meters (on seven floors) of enclosed office and common space. It features a 100-seat theater, state-of-the-art digital production capabilities, underground parking and retail space at street level. It has a unique horseshoe design that maximizes light and showcases the sloping topography.

Among the citations it has won so far are the prestigious Chicago Athenaeum International Architecture Award for Best New Global Design.

Areas occupied by Lucasfilm are studded with “Star Wars” character figures—most of them the actual models that animators worked on, according to Disney executive director Sesha Kanthamraju.

Apart from the one in the lobby, a life-size Yoda by US sculptor Lawrence Noble sits on a boulder-like waterfall that flows into a shallow pool in the public garden. Yoda statues are virtual signposts of Lucasfilm properties. 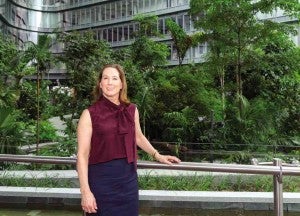 On Thursday morning, outlined on the inner glass walls of The Sandcrawler were silhouettes of employees hoping to catch a glimpse of Lucas and his party coming down from the 100-seat theater on the fifth level, where the program was held. It was a happy sight that likewise illustrated the vaunted tradition of “providing signature creative and beautiful workspaces for Lucasfilm workers.” Their idol would later meet with them for souvenir snapshots and some conversation.

Needless to say, the inauguration made headlines around the globe. Meanwhile, “Star Wars” devotees have a singular concern: the future of their parallel world.

Lucas previously said he decided to work with Disney “so that the films will have a longer life … more fans … more people to enjoy them in the future. It’s a very big universe I’ve created and there are a lot of stories still sitting in there.”

Kennedy’s unblinking assurance: “We’re absolutely going to make ‘Star Wars’ movies and we are in the midst of the really fun part of the process [for the next episode], which is, we’re sitting down with a couple of writers, discussing ideas and deciding what those stories might be.” 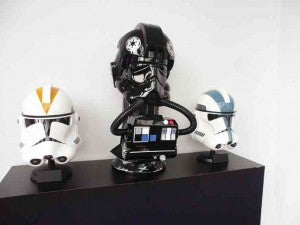 IN EVERY nook, a souvenir emmie velarde

J.J. Abrams (“Mission Impossible III,” “Star Trek Into the Darkness”) is directing “Star Wars Episode VII,” due out in December 2015, according to recent announcements from Disney. Latest reports also say Abrams is writing the screenplay with Lawrence Kasdan (“The Empire Strikes Back”).

In a 2013 TV interview, Kennedy told Lucas that “the main thing” was to make sure that the “Star Wars” universe continues to grow, and protect its characters, “so they continue to live in the way you created them.”

The best part of the new set up, she said on Wednesday, was having Lucas around, so that she was not entirely on her own. “It’s important,” she said, “that he continues to be a little guardian angel on my shoulder … my Yoda.”