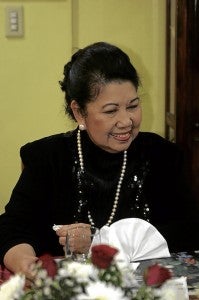 MANILA, Philippines—The executive committee of the Metro Manila Film Festival denied Thursday the  allegations of the Film Academy of the Philippines that the MMFF officials mishandled the earnings of the movie festival, which almost reached P1 billion.

Marichu Maceda, MMFF executive committee spokesperson, said in a statement that all the funds of the MMFF, particularly the amusement tax collections, “are intact, accounted for and had been properly distributed to its intended beneficiaries.”

This was after FAP asked a Quezon City court on Wednesday to compel the organizers of the annual Metro Manila Film Festival to release some P82.7 million in amusement tax collections from previous festivals, which it said had yet to reach their “intended beneficiaries” like ordinary workers in the movie industry.

Maceda said that FAP “has no basis to claim P82 million in amusement tax proceeds earned by the MMFF from 2002 to 2008.”

“The MMFF Execom is mandated to allocate and remit to the designated beneficiaries the net proceeds of the amusement taxes after deducting all operational and incidental expenses of the MMFF. This is being complied with religiously every year,” she said.

Due to changes in the amusement tax structure, Maceda said gross revenues from Metro Manila theaters are further reduced by the following factors:

“Thus, even if the MMFF gross revenues increase, the amount given to beneficiaries may decrease due to these factors,” the MMFF spokesperson said.

Under directive of the Office of the President in November 2010, a large portion of the amusement tax proceeds goes to the Movie Workers Welfare Foundation Inc. with 50 percent, 20 percent each for FAP and Motion Picture Anti-Piracy Council, and five percent each for Optical Media Board and Film Development Council of the Philippines.

The FAP is an umbrella organization of various guilds in the local film industry. Its petition named the NCAP and MMDA chair Francis Tolentino, who also heads the MMFF executive committee, as respondents

Although the Metro Manila Development Authority was tasked to manage the MMFF on the virtue of an Executive Order 86-09, Maceda cleared the agency from the alleged mishandling because “it is not a beneficiary of the MMFF fund.”