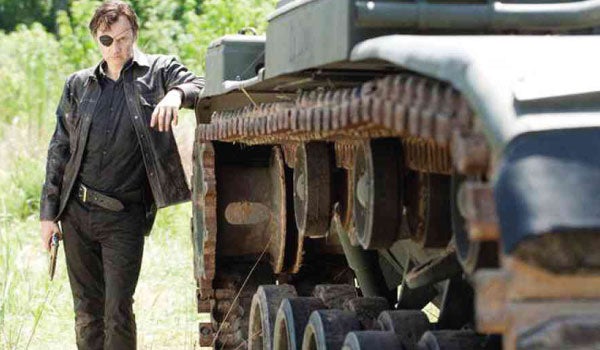 DAVID Morrissey as the Governor in “Walking Dead”

After the third season’s letdown of a finale, “The Walking Dead” returns for a fourth season, reminding viewers why it is a compelling horror-drama series.

The previous season ended with two communities of survivors merging, following the ruthless Governor’s (David Morrissey) botched attempt at decimating former cop Rick Grimes (Andrew Lincoln) and his tight-knit group. Rick’s group converted a prison into their home, a “fortress” from zombie attacks and, subsequently, from the Governor’s armed, if hesitant, henchmen.

Devotees of the seminal comic book knew that the prison showdown was inevitable, as it was a pivotal, momentous point in the monthly series. The TV show, however, smartly stretched the Governor’s “reign,” defining and redefining him in Season Four. As usual, Morrissey is spectacular as the charismatic leader who hides his unrepentant, murderous side.

There’s a reiteration of Rick’s taxing leadership duties, as he struggles to keep his camp alive amid the zombie apocalypse. The new season’s first pressing threat is a fast-spreading illness that sends the prison community reeling, with some of them succumbing to it. A couple of episodes are devoted to this somewhat grueling but character-enhancing story line.

The Governor is given two episodes, which help re-establish his dichotomy; he’s a genuinely caring family man one minute, and a horrific executioner the next. He’s a different monster from the original comic book character (which was equally reprehensible for its exceedingly brutal ways).

Rick, meanwhile, is still effectively and piercingly played by Lincoln, whose unwavering portrayal is deserving of acting awards and other tokens of acclaim. Rick has recovered from his wife Lori’s (Sarah Wayne Callies) tragic death last season, and is constantly provoked and challenged in new ways this time. Until the mid-season finale, Rick is put through the proverbial wringer, and Lincoln manages to consistently imbue the character with authenticity.

Change is constant as well. Among the most evolved mainstays are Rick’s son Carl (Chandler Riggs), now a proven gunman; Carol (Melissa McBride), now a no-nonsense survivalist; and Michonne (Danai Gurira), who has become a generous team player.

Going back to the mid-season finale, it’s a powerfully acted episode, a fitting climax to the Governor’s drawn-out arc. It should have happened in the last season-ender, but the long-anticipated confrontation between the two factions brings major changes and introduces new scenarios to the perpetually embattled survivors.

“The Hunter” centers on Iranian ex-con Ali, whose life takes a tragic turn after his release. The film will air Jan. 19, 9 p.m. on CinemaWorld.

Based on the novel by Stephen King, “Under the Dome” is set in a town where an invisible force field, dubbed “The Dome,” separates the area from the rest of the world.