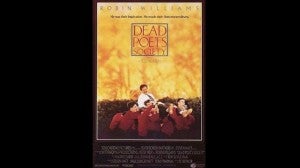 In addition, let’s pay tribute to our teachers and mentors by re-viewing excellent movies about classroom heroes who have devoted their lives to motivating young people to be the very best they can be:

“Goodbye, Mr. Chips,” especially the musical version starring Peter O’Toole. His valedictory upon his retirement after many decades of dedicated teaching is not to be missed.

“The Miracle Worker” (1962). How do you teach a deaf, dumb and stubbornly uncooperative little girl how to communicate? This film about Helen Keller (Patty Duke) and her teacher, Annie Sullivan (Anne Bancroft), is a moving testament to the transformative power of “passionate” educators who are determined to make a difference in their students’ lives – against all odds!

“Dead Poets’ Society” (1989). Robin Williams plays a literature professor who inspires his students to love poetry – and to seize the day!

“The Great Debaters” (2007). Denzel Washington portrays a debating mentor who trains disadvantaged youths so well that their team goes on to challenge Harvard University in the national championship.

“Pay It Forward” (2000). A boy (Haley Joel Osment) tries to make the world a better place after his mentor motivates him.

“Up the Down Staircase” (1967). Sandy Denis portrays a rookie instructor at a racially mixed school who gets through to her students despite overwhelming obstacles.

“Dangerous Minds” (1995). Michelle Pfeiffer struggles to connect with her unruly students in an inner-city school.

“The Emperor’s Club” (2002). An idealistic mentor tries to redeem an uncooperative youth.

Other worthy titles: “Good Will Hunting,” “Educating Rita,” “The Class,” “Lean On Me,” “Freedom Writers,” “To Be and to Have,” “Blackboard Jungle,” “The Ron Clark Story,” “Half Nelson,” “Wonder Boys,” “The School of Rock,” “Election” – and a modern classic from China, “Not One Less.”