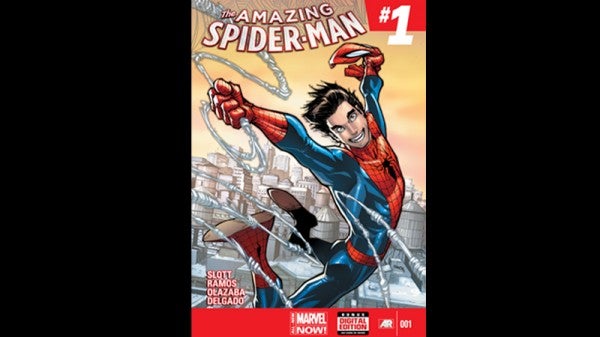 In this image provided by Marvel Entertainment, shows the cover issue of “The Amazing Spider-Man” comic book by writer Dan Slott and illustrated by Humberto Ramos. More than a year after Peter Parker had his body inhabited by the mind of the villainous and hyper-intelligent Otto Octavius, aka Doctor Octopus, Marvel Entertainment’s web slinger is getting back inside his own skin. Peter Parker’s planned return was first reported by the New York Daily News on Sunday, Jan. 12, 2014. AP

NEW YORK – Spider-Man is set to be “amazing” again.

More than a year after Peter Parker had his body inhabited by the mind of the villainous and hyper-intelligent Otto Octavius, aka Doctor Octopus, Marvel Entertainment’s web slinger is getting back inside his own skin.

Writer Dan Slott penned the swap that saw “The Amazing Spider-Man” end with issue number 700 at the end of 2012. With that in place, the long-running book was replaced by Octavius’ adventures in the twice-monthly “Superior Spider-Man.”

Now, said Slott, Parker is returning to a world that never knew he was gone, which, he said, is both a blessing and a curse.

“We’ve been watching Doc Ock knock over all the dominoes and that’s part of the fun, too, trying to imagine what kind of world Peter is going to Rip Van Winkle in to,” said Slott, whose tenure writing Spider-Man has stretched for years, often to critical acclaim. The first issue of “Amazing Spider-Man,” illustrated by Humberto Ramos, is due out in February.

“When he comes back it’s going to be a whole new world for him.”

Not that everything is going to be bad, said Slott. After all, while Octavius was in his body, he took a doctorate and founded a company, among other things.

“Every one’s expecting that it’s going to be a nightmare, a landscape of broken friends and crushed dreams, but there’s another side to it, too,” he said. “When Peter went out, Doc Ock crashed course through college and got him a doctorate, got him a girlfriend and got him his own company,” said Slott.

“It’s going to be a strange new place for Peter Parker with both ups and downs,” for the character created by Steve Ditko and Stan Lee who first appeared in “Amazing Fantasy” No. 15 more than five decades ago.

As for Octavius? Slott won’t say, but referenced the proverb about living in interesting times for the long-time villain who discovered, if only briefly, a taste of what it means to be a hero.