MANILA, Philippines – Animal Planet invites you to experience the beauty and secrets of marine biodiversity in the documentary “The Coral Triangle” this January.

The Coral Triangle is a landmark series that unlocks the hidden secrets of the Ocean’s Amazon – a six million kilometer square area spanning Indonesia, Malaysia, the Philippines, Papua New Guinea, Timor Leste and the Solomon Islands, which is considered to be the global center of marine biodiversity.

The three-part documentary, captured with the grandeur of blue-chip cinematography and featuring some of the world’s foremost experts on the region, reveals the Coral Triangle as a place of unrivalled marine diversity, beauty and biological significance.

The Coral Triangle is now recognized as an area of acute ecological  importance and of great concern  by  many  governments  including  Indonesia, Malaysia,  Timor  Leste,  Papua  New  Guinea,  the  Philippines  and  the  Solomon  Islands.

These countries have come together to form “The Coral Triangle Initiative,” which is urgently spreading ideas about sustainable fishing  practices  and  setting  up  marine  reserves  across  the  region  to ensure  pockets  of  this  fragile  ecosystem  are  protected  and  allowed  to  thrive. 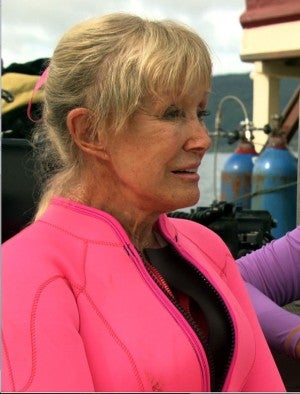 Valerie Taylor, an underwater explorer and conservationist recounted how she started filming the documentary.

“I first went there in 1973 and I realized it was an exceptional place, but I never knew how exceptional.  And I felt that it should be protected right back then, and it’s the center of all the marine life in the tropical Pacific and Indian Ocean.  It’s the richest area of diversity and marine life in the world.  It should be protected and its integrity should be maintained,” Taylor said.

She said the place was now being endangered by pollution and human activities.

“It is already been degraded by fishermen – overfishing, especially long line fishing for the tuna and its removal of the sharks.  When I first went there, every day we saw tuna, huge schools of fish.  You don’t see them very often anymore,” she said.

She said there was a great battle for marine conservation due to human activity and climate change.

“There’s only one conservation initiative that really works and that is marine parks that are no-take zones.  Like all animals-ourselves included, all marine animals need a secure place to love, live and breed.  And unfortunately, fishing practices have disturbed this place.  We need to return it to the marine world, and it’s not just a rock at sea.  It has to take in mangroves, sand slopes, rocky reefs, coral reefs, islands off shore so the entire range of diversity as a protected area,” she said. 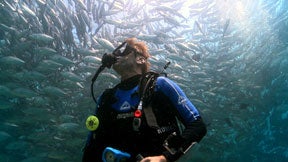 “The ocean has the ability to purify Earth. We are already overpopulating the planet; it will only get worse if we pollute what’s left of our wilderness areas on land and in the sea because you need those wilderness areas to replenish the air, even the water we drink and the farms and the cities,” she said.

The documentary, according to Taylor, will raise awareness on the importance of our marine biodiversity.

She said education was one way to raise awareness.

“I feel if the children in the schools were taught to understand what I’ve already said – that all animals, ourselves included we’re supposed to live, love and breed – if they understand that, and it works for the ocean just the same as it does for the land, then perhaps, there is a very good chance of maintaining the integrity of areas of the marine world into the future,” she said.