Phil Everly and brother were architects of harmony | Inquirer Entertainment

Phil Everly and brother were architects of harmony 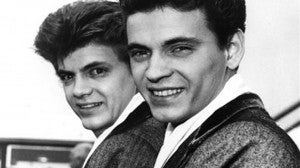 In this April 1, 1960 file photo, Phil, left, and Don of the Everly Brothers arrive at London Airport from New York to begin their European tour. Everly, who with his brother Don formed an influential harmony duo that touched the hearts and sparked the imaginations of rock ‘n’ roll singers for decades, including the Beatles and Bob Dylan, died Friday, Jan. 3, 2014. He was 74. Everly died of chronic obstructive pulmonary disease at a Burbank hospital, said his son Jason Everly. AP

NEW YORK — Art Garfunkel answered the door to his Manhattan apartment holding a framed black-and-white picture of two smiling men. It was a test.

Correctly identifying Phil and Don Everly in the picture would reveal me as a journalist knowledgeable about music and the roots of Garfunkel’s career. Flustered, I failed. It should have been obvious.

The Everly Brothers, who will blend their voices no more following Phil’s death at 74 Friday from chronic obstructive pulmonary disease, were the architects of rock ‘n’ roll harmony. Simon & Garfunkel were unimaginable without them. John Lennon and Paul McCartney took their cues, too. Their harmonies (and don’t forget George Harrison) formed the bedrock of the Beatles’ sound.

Like Garfunkel, Phil sang the high notes. He had the lighter colored hair. He would step away from the microphone, like on “Cathy’s Clown,” to let older brother Don sing a few lines alone and you noticed how unremarkable Don’s voice was unadorned. Only when that voice merged with his brother’s as a single, new voice did it become special.

The Everly Brothers’ reign on the pop charts was relatively short, from the mid-1950s until the British Invasion swept in a new generation in the early 1960s. The Everlys receded, but it was plain the newcomers had been listening.

Sweet as they sounded, their hits resonated because they taught a huge post-World War II generation as it was growing up that love wasn’t all roses, blue skies and candy. “Bye bye love,” they sang. “Bye bye happiness. Hello loneliness. I think I’m a-gonna cry.”

In the sumptuous “All I Have to Do is Dream,” the romance is frustratingly unrequited. “I need you so, that I could die,” they sang. “When Will I Be Loved,” they wondered. Even success was fraught with worry: the couple in “Wake Up Little Susie” fretted over whether anyone would believe their excuses when they fell asleep watching a movie.

With their two acoustic guitars and a sound that referenced rock and country, the Everlys would be categorized today and be mostly on the country music charts. Thankfully, things were freer when they were young and their music was heard by everyone.

Phil and Don Everly pioneered another rock staple: feuding partners, often brothers, who were never as compelling apart as they were together. Phil famously threw down his guitar and walked offstage during a 1973 gig in California, prompting Don to tell the crowd, “The Everly Brothers died 10 years ago.” Ray and Dave Davies of the Kinks carried on that fractious tradition, as did Noel and Liam Gallagher of Oasis.

Simon & Garfunkel invited the Everly Brothers to be their opening act for a 2003 tour. Paul Simon, often exasperated by his on-again, off-again partner and quite accomplished on his own, couldn’t help but be amused by the irony of two partnerships where real-life harmony didn’t match what was onstage. Phil and Don hadn’t seen each other for three years before meeting in the parking lot before the first show.

“They unpacked their guitars — those famous black guitars — and they opened their mouths and started to sing,” Simon told Rolling Stone magazine. “And after all these years, it was still that sound I fell in love with as a kid. It was still perfect.”

Famous fans paid their debts. Simon and Garfunkel could have invited anyone for that 2003 tour. McCartney opened the door for “Phil and Don” in his 1976 hit “Let ‘Em In” and wrote the single “On the Wings of a Nightingale” for their 1984 reunion. Rockpile partners Dave Edmunds and Nick Lowe recorded an EP of Everly covers and Edmunds produced the “EB 84” album.

The best tribute always comes when singers discover that the sound of their voices together creates a magic that isn’t there when each is alone, like John Paul White and Joy Williams of the too-aptly named The Civil Wars. Mumford & Sons and the Avett Brothers are introducing harmony to a new generation. The Jayhawks were special because of how Gary Louris’ and Mark Olson’s voices merged.

“You realize it’s something that doesn’t come around in everybody’s lifetime, having a kind of chemistry like this,” Louris, who sang the high notes, told The Associated Press after reuniting with Olson in 2011.

Phil’s death comes just as Billie Joe Armstrong of Green Day and Norah Jones, are on the charts with “Foreverly,” a song-for-song cover of the Everly Brothers’ 1958 album “Songs Our Daddy Taught Us” (daddy was a country music musician in his own right).

Each have beautiful, expressive voices — Armstrong showing a depth and versatility he can’t often display in Green Day. Truthfully, though, those voices sit side by side. They don’t become better together. They don’t become one voice.

For that, we had Phil and Don Everly.