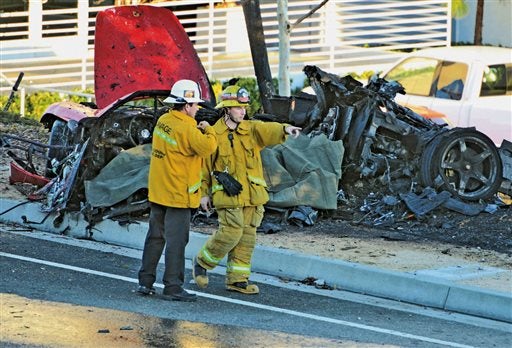 In this Nov. 30, 2013, file photo, sheriff’s deputies work near the wreckage of a Porsche that crashed into a light pole on Hercules Street near Kelly Johnson Parkway in Valencia, Calif. A coroner’s report says the Porsche carrying “Fast & Furious” star Paul Walker may have been going 100 mph or more before it crashed, killing both Walker and the driver. The report released Friday, Jan. 3, 2014, by the Los Angeles County coroner’s office says that Roger Rodas, Walker’s friend and financial adviser, was driving the 2005 Porsche Carrera GT at an unsafe speed, estimated by witnesses to be 100 mph or more. AP

The 40-year-old actor’s body was charred beyond recognition in the November 30 accident, they said in a report describing the burned-out wreckage in graphic detail.

The $400,000 2005 car was driven by Walker’s friend Roger Rodas, who also died in the crash in Santa Clarita, north of Los Angeles, where they had attended a charity event.

Neither man tested positive for alcohol or drugs including marijuana, cocaine, opiates and methamphetamine, a coroner’s report said, adding that autopsies were conducted on December 3, but toxicology results were only confirmed Friday.

“The driver was driving a red Porsche Carrera GT… at an unsafe speed, approximately 100-plus miles per hour,” said the report, citing an investigator’s account of the crash.

The report said Walker was found “wearing remnants of a black T-shirt, a pair of black jeans and a pair of gray boxer briefs” and was “lying supine in the passenger seat.”

“The decedent was charred and in a pugilistic stance,” it said, describing the posture of his body after the crash.

A coroner’s spokesman said “pugilistic” described “how the muscles of the body contract due to the heat into a ‘boxer-like’ appearance.”

The report said the driver lost control of the car “for unknown reasons,” causing it to spin around and hit a curb, after which the driver’s side of the Porsche struck a tree and then a light post.

“The force of those collisions caused the vehicle to spin 180 degrees and continue in an easterly direction. The passenger side of the vehicle then struck another tree and burst into flames,” it said.

It said Walker’s body “cannot be positively identified visually,” adding that “due to the extent of the injuries, the decedent (was) not (a) viable candidate for tissue donation.”

Rodas also suffered multiple injuries: his skull was fractured and his brain was exposed, the autopsy report said.

Walker’s death stunned fans of the high-octane series “The Fast and the Furious,” and was a major blow to studio giant Universal Pictures, for whom the franchise is a huge money maker.

Universal announced the studio had shut down production of “Fast and Furious 7” following Walker’s death.

The first “Fast and Furious” movie appeared in 2001. The series, with its focus on fast cars, tough guys, sexy starlets and exotic locales, is one of Hollywood’s most successful global franchises.

The limited-edition Porsche, which can reach 100 miles per hour in less than seven seconds, has a history of being difficult to control, according to the LA Times which said it lacks a stability management system built into other models.

“I just got a little sideways and then it started spinning,” he said, cited by the Hollywood Reporter. “It was kind of like driving on ice,” he said.