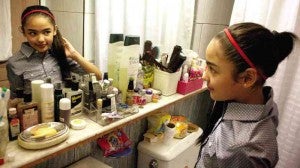 THE YOUNG actress dolls up in the bathroom.

Santa Claus dropped by early this year for child star Andrea Brillantes. Her young dreams were fulfilled long before the holidays began.

In May, the 10-year-old landed the title role in the ABS-CBN remake of the soap, “Annaliza.”

Shortly after, she and her family moved into a spiffy new condo unit in Quezon City. Recently, she bagged the best child performer trophy (for “Annaliza”) at the movie press’ Star Awards for TV.

Seemingly wise beyond her years, Andrea credits “hard work” for her fortune. She didn’t get there overnight, no sir.

Four years ago, she took on a series of bit roles after placing first runner-up in Little Miss Confetti Princess sponsored by a direct-selling company.

She often played the daughter, or younger versions, of stars like Shaina Magdayao, Kim Chiu and Andi Eigenmann in TV tearjerkers.

One day, Johnny Manahan noticed the plucky kid playing in the hallway of the Star Magic office. She soon became a regular in the kiddie gag show, “Goin’ Bulilit,” and was launched to full-fledged stardom in “Annaliza.”

Manahan was only one of a string of Santas for Andrea.

Her first TV show was with the late comedy king Dolphy. “I worked with Lolo Paps (her pet name for Dolphy) in (the TV5 show) ‘Pidol’s Wonderland’ when I was 7. He gave me a DS Nintendo MP3 player.”

Other costars, coworkers, fans and friends have likewise showered her with gifts, most of which are displayed in the family’s well-appointed condo. 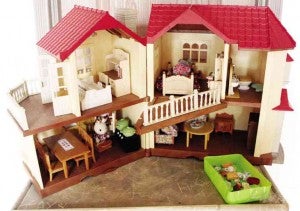 A TOY store manager gave her this dollhouse after a show.

Zanjoe, whom Andrea calls “Tatay” (dad), gave her an iPhone 5C and a school bag; from his girlfriend, Bea Alonzo, she received a Furla bag.

Andrea’s Hello Kitty bag came from Denise; the pink cosmetics kit, from makeup artist Joshen Van Lee; the Techstatic headphones, courtesy of Patrick, and an Adora doll, which now sits on her bed, from Sylvia.

When she attended the birthday party of Joel’s twins last September, she brought home a papier-mâché carousel horse and a treasure chest of toys.

A fan gave her a vanity mirror that also works as an accessories case. From a few other admirers she got shades (Ray-Ban) and shoes.

After a show in Toy Kingdom, the store manager gave her a dollhouse.

Since her shoe (Otto and Vans) and clothing (Moose Girl, Zara Kids, Forever 21, SM Kids Fashion and Baby Fashionista)  sponsors regularly send freebies, Andrea’s mom, Mabel, donated some of them to survivors of Supertyphoon “Yolanda.” The girl didn’t need convincing. “They need these clothes more than I do,” Andrea says.

Although her room is decorated with Bratz dolls and teddy bears, she’s not that fond of toys. She’d really rather read.

SHE WORE this dress (by Reginald Cruz) when she won at the Star Awards for TV.

“I’m reading ‘The Popularity Papers’ (written and illustrated by Amy Ignatow) now. It’s a fun book, easy to read because it’s like a comic book,” she says. She’s a self-confessed gadget fanatic, too. “I play games and do my homework on the tablet.”

A prized possession for mom Mabel is a book on the Japanese doll, Blythe. Andrea was named after the rare doll. Her real name is Anndrew Blythe Gorostiza. Show biz handlers suggested the name change because, they pointed out that “Blythe” sounded too foreign and “Gorostiza” had poor recall.

Manager Becky Aguila relates that Andrea and her family were ecstatic about moving into the Quezon City condominium building.

“We used to live in Taytay,” Mabel recounts. “The commute took so long.”

Mom wanted to buy the flat but her kids dissuaded her. “They said we should save up for a bigger home.”

Andrea is the youngest in a brood of four. Her older siblings are Nina, Kyla and Kismet. Judging from the framed photos on the living room walls, the Gorostiza kids are all lookers.

“But so far, only Andrea has shown interest in show biz,” mom says. Mabel, who took up fine arts in college, took some of the photos.

Andrea has inherited her mom’s artistic gifts. For one thing, she doodles a lot. On Mother’s Day, she gifted Mabel with a drawing, which is now posted on the refrigerator door.

A Grade 5 pupil at Ambassador School for Children, Andrea dreams of being a filmmaker. “I want to direct when I grow up,” she says. She idolizes Direk Ruel, FM Reyes and the other directors she has worked with.

Mom encourages the kid’s creative interests and recently gave her paintbrushes and art supplies. Aunt Maria bought her an easel and canvas.

Mabel and Andrea collaborated on the home décor. 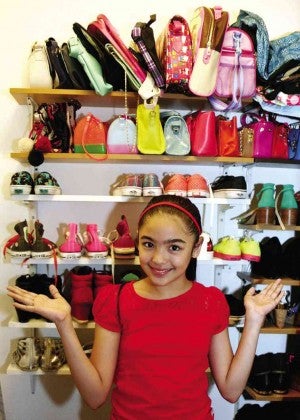 SHE SHOWS off bags and shoes neatly lined up on shelves in a corner of the condo unit.

“She wanted a romantic, French countryside look,” Mabel relates. “Her big dream is to travel to Europe.”

Ceramic tiles of Big Ben, the Eiffel Tower and the Leaning Tower of Pisa are displayed in the living room. The sofa is studded with throw pillows showing Parisian scenes.

Mabel asked a friend to execute her design ideas for the couch and beds. (The sofa is a foldable bed, she notes.) They purchased most of the décor pieces in nearby malls.

The first thing that Andrea bought with her “Annaliza” earnings was a pink vintage chair. “It served as our focus point for the overall look.”

For Christmas, Andrea wanted the ornaments and décor to hew closely to the interiors’ theme. “We considered hanging white birds and silver and purple ornaments to make the tree look magical,” Mabel explains.

They picked a white tree to make the place look like a winter wonderland. “I love white,” says Andrea.

“Alice in winter wonderland,” Mabel describes the holiday look. “White makes the condo look cool and breezy, even though it still gets hot and humid these days.”

Holidays for this family are hearty, eat-all-you-can feasts, says Mabel who admits: “I don’t know how to cook, so we usually order takeout. Last year, we had a Japanese buffet: sushi, sashimi, California maki, tempura.”

Andrea insists she is quite content. “I don’t have a Christmas wish because I have everything I want.”

Pressed to make one for her family, she enthuses: “A house and lot, with a swimming pool and parking lot.”

That’s a parking lot, not just a garage, because she wants it filled with sports cars. “A Lamborghini!” she exclaims, eyes lighting up.

Her fondest wish is to play a young Dyesebel someday.

Friends have given her a fuchsia mermaid tail. “I’ve tried it on; it suits me,” she gushes. 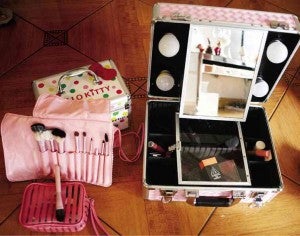 She wants it so much, she wouldn’t mind auditioning.  “Even if the lines are long, I’ll try out for the role,” she insists. How about Darna? “My dream role is ‘Darbel!’ A combination of Darna and Dyesebel.”

Occupying a place of honor near the front door is a framed poster of “Annaliza”—Andrea’s biggest role so far. On a table in front of the poster is her Star Awards for TV trophy as this year’s best child performer.

She is truly proud of this achievement. When she heard her name called on awards night, her mind went blank, she admits. “I got to deliver only half of my speech. I forgot the rest,” she recalls. “I kept crying because I was so happy.”

On their way home, her mom asked what she wanted for dinner. “I couldn’t think,” Andrea says. “The only thing on my mind was that I won.”