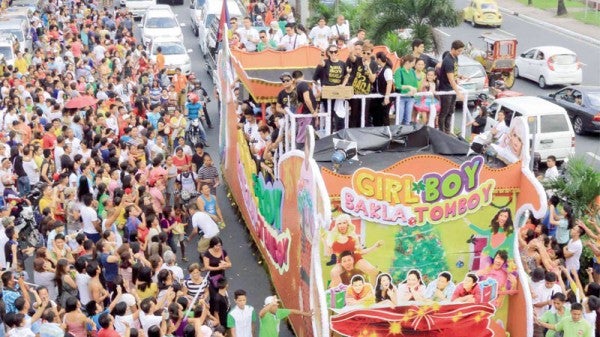 MANILA, Philippines – As Filipinos flock to the cinemas on Wednesday for the premiere of movies participating in the 39th Metro Manila Film Festival (MMFF), comedy and horror are expected to make a killing in ticket sales.
Entertainment reporter and columnist Roel Villacorta said that while “Boy Golden” starring ER Ejercito and KC Concepcion, and  Robin Padilla’s “10,000 Hours” were given Grade A ratings by the Cinema Evaluation Board (CEB), the likes of “My Little Bossings,” “Girl Boy Bakla Tomboy” and “Pagpag” will become box office hits.
It was because, Villacorta said  in an interview over Inquirer Radio 990AM,  Filipinos are fond of comedy and horror films. He also noted that the said films feature among the most popular celebrities in the country.
“My Little Bossings” directed by Marlon Rivera stars Vic Sotto, Ryzza Mae Dizon, Kris Aquino and her son Bimby while “Girl Boy Bakla Tomboy” by Wenn Deramas stars Vice Ganda and Maricel Soriano.  The popular love team of Daniel Padilla and Kathryn Bernardo, on the oher hand, top bill the horror film “Pagpag” directed by Chris Martinez.
Villacorta said he hopes “Boy Golden” and “10,000 Hours” will follow close behind in ticket sales, as well as “Kimmy Dora, Ang Kiyemeng Prequel.”
“I seldom watch Filipino-made action films but this film really caught my attention,” he said of “Boy Golden,” which tells the story of Arturo Porcuna, a notorious gangster of the 1960s.
Asked why it was given a Grade A rating by the CEB amid its theme of gang violence, Villacorta said it was the lesson imparted by the film that matters. “Boy Golden” is also directed by Chito Roño who has had his share of directorial awards from the MMFF.
A Grade A rating means the film will be exempted from amusement tax. The other MMFF films received a B rating, which will grant them a 50 percent discount from the said fee.
Villacorta said many are predicting that Ejercito or Padilla will win the Best Actor award.
Padilla is the lead actor of “10,000 Hours,” which is inspired by the life of former senator and now rehabilitation czar Panfilo “Ping” Lacson. Directed by Bb. Joyce Bernal, the film narrates how the senator became a fugitive, later to be cleared of the charges against him.
Villacorta said “Kaleidoscope World,” which is based on the life of rapper Francis Magalona, would have benefitted more from additional publicity while “Pedro Calungsod, Batang Martir” may best be promoted through schools.
In the end, “the (MMFF) is really a competition of commercial movies,” he admitted, saying that the public should instead look on other film festivals for quality films, or those that prioritize film artistry instead of commercial success.

He said the Cinemalaya, which features independent films, and Sineng Pambansa of the Film Development Council of the Philippines are among those that screen high quality films.