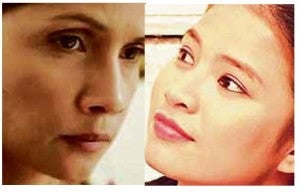 If we go by the quality of the three indies we saw last Wednesday in the five-entry New Wave section of the 39th Metro Manila Film Festival, movie buffs have something to cheer about.

The themes tackled in Alvin Yapan’s “Mga Anino ng Kahapon” (about mental illness), Armando “Bing” Lao’s “Dukit” (about forgiveness), and Gino Santos and Aloy Adlawan’s “Island Dreams” (about love and loss) are as disparate as they are diverse, but you’ll be richly rewarded if you succumb to the nascent moviegoing thrills they offer—a potpourri of cinematic styles and treats guaranteed to make your pre-Christmas revelry eventful:

As paranoid schizophrenic Irene, Agot Isidro turns in what could well be the finest performance of her career—and one of the year’s best—in Alvin Yapan’s “Mga Anino ng Kahapon,” a brutal but affecting exploration of mental illness, and how love and familial devotion are redefined by the difficult challenges the pathological condition presents.

Stripped of her dignity, Irene’s exasperation is palpable but never over-the-top in Isidro’s delicate thespic handling. She fleets between lucidity and insanity as her husband Ed (TJ Trinidad), mother Flor (Upeng Galang), son Brian, and brother-in-law Carlo (Carlo Cruz) watch her helplessly—with pity and fear in their eyes.

Yapan offers a moving insight into how they deal with her illness as he flings them onto their individual journeys.

Stories involving mental disability are always tricky—but, he treats his subject matter with respect and unerring sensitivity, and is smart enough to judiciously rein in the schmaltz before the movie’s emotionally charged scenes can  get too Hallmark-style hokey.

The movie feeds on the dramatic strengths of Isidro, Trinidad and Cruz as they help Irene accept her dire situation, overcome her ineffable fears, and embrace her uncertain future—with infinite hope!

Set against Pampanga’s dying woodcarving tradition, Armando “Bing” Lao’s “Dukit” is initially discombobulating for viewers who have been weaned on the conventions of linear storytelling. The writer-director thrives in his film’s assertive, if occasionally indulgent, narrative structure, but never allows the sudsy details of its protagonists’ lives to deflate into cloying sentimentality.

It follows the decades-long tale of Waldo (Willy Layug, Bor Ocampo), who grows up resenting the neglectful father who abandoned his cash-strapped family for a younger woman.

When Waldo finally finds his place in the sun, as a respected woodcarver of religious images, his wife Bebeng (Raquel Villavicencio, Hazael Thea Lelay) urges him to bury the hatchet and find forgiveness in his heart. Some things are easier said than done, however—especially if the object of your disdain isn’t vigorously trying to make amends!

The movie gets off to a sluggish start, but as soon as it picks up its pace, you’ll find yourself rooting for the raw humanity depicted by its actors, as well as the rich, unforced metaphors of its sincere Catholic aesthetics.

There’s more to “Island Dreams,” easily the New Wave lineup’s most relentlessly charming entry, than its fun and fizzy coating—not the least of which is the canny casting of its lead stars, Louise delos Reyes and Alexis Petitprez.

In the gorgeously photographed film, Delos Reyes and Petitprez portray enthusiastic Filipina tour guide, Julie, and her sullen LA-based client, Zach, who’s in the rustic island-community to visit a secluded place known for its romantic myths and mystical creatures.

They don’t have a lot of things in common—except their broken hearts! Are they ready to fall in love—and risk getting hurt again?

The film is so adorable that it’s easy to disregard its implausibilities (note the scene involving a couple of bandits).

Moreover, “Island Dreams” will win you over with its infectious optimism and charming whimsy, anchored on the vibrant chemistry of Delos Reyes and Petitprez. For hopeless romantics, this is the movie to see!