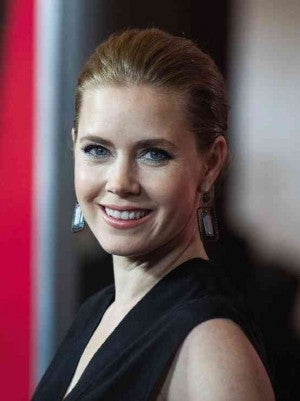 ADAMS. Steps out of her comfort zone. AFP

LOS ANGELES—“There are definitely times when you want the scene not to be interrupted,” Amy Adams said, in a recent interview, of David O. Russell’s unusual directing method in “American Hustle.” She described how David, during a take, would shout directions to her. But no matter. Amy, her costars, Christian Bale, Jennifer Lawrence, Bradley Cooper, Jeremy Renner, and virtually everyone in the cast, including Robert De Niro in a cameo, shine in David’s excellent film loosely based on the FBI Abscam sting operation in the ’70s that sent several US public officials to jail.

“David creates an environment,” remarked Amy, who plays Sydney Prosser, the devious and seductive partner of Irving Rosenfeld (Christian), a con man. They are forced to work for FBI agent Richie DiMaso (Bradley Cooper), who pushes them into the world of corrupt officials and the mob.

“David tells you where to move in that 360-degree environment,” the actress added about the filmmaker’s in-your-face style. “You have an idea where you are going, but you never know how long the scene is going to run, or what he’s going to ask you to do within that. When he is directing, at any moment, he could say, ‘Go to the window and say that line!’ So, you just have to walk over to the window and say the line. It’s very immediate. You have to be on your toes!”

“Sure,” replied Amy when asked if David’s habit of interrupting is disconcerting. “There are definitely times when you are like, ‘Take a deep breath,’ but you get used to it. I think it makes people better actors to work on David’s films, because your focus becomes laser-sharp.

“David was a different director on ‘The Fighter’ than he was on this film,” said Amy, who earned Oscar and Golden Globe nods for “The Fighter” (she nabbed a Golden Globe Best Actress nomination for “American Hustle”). “Apparently, on ‘Silver Linings,’ he was closer to what he was on this film. Jennifer and Bradley had this energy that they carried over from ‘Silver Linings.’ He was much louder on the set (laughing) so it took me a moment to adjust.

Of her co-stars, Amy gushed, “They are absolutely wonderful to work with. Bradley and Jennifer are so committed and are excellent actors. But, I have said this before, it was not like working with Christian again. I have worked with Dicky (Christian’s character in ‘The Fighter’). Now, I am working with Irving (his character in ‘American Hustle’). That’s what so brilliant about working with Christian. Every day, you get to go on this journey of commitment that he has taken, and it really elevates everyone around him!”

Amy’s acting is not the only striking thing about her in “American Hustle.” Teaming up with costume designer Michael Wilkinson, Amy wears sexy, cleavage-baring blouses and dresses evocative of the ’70s.

“When I signed onto the film, David was not like, ‘It’s going to be like a boob show,’” she recalled. “There was none of that. It wasn’t until I saw the reference boards that I knew I was going to have to take a deep breath, and embrace the era which was all about female empowerment. Sydney was definitely the kind of woman who got caught up in that—we are sexual equals to men now, we make our choices. Roe vs. Wade had happened, and the birth control pill was out. She was somebody who found that very empowering. Not only could women be sexy, they could be smart and equal to men—and that is where she is coming from. So, I embraced all of that.”

Amy laughed and admitted that wearing those daring costumes has inspired her to be bold with her red-carpet look in real life. “It (the film’s wardrobe) puts it into perspective. I tend to be a little more conservative and modest than others, but I am just getting to a point in my life where I just want to have fun and experience things. That being said, I do have a daughter, so I am probably not going to be doing anything too risqué. But, I will step out of the comfort zone a little more easily now after the film, yes.”

That daughter is Aviana Olea, her 3-year-old child with fiancé, actor and artist Darren Le Gallo. Asked when she’ll have that wedding, Amy answered, “Someday—and, it will happen.” Maybe when Aviana is older? “Well, maybe. We will wait until she can be a flower girl, and she can remember it.”