Nirvana, Kiss among new members of Rock and Roll Hall of Fame 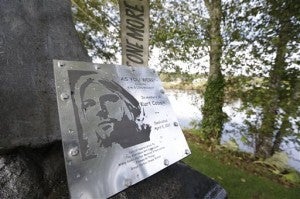 In this photo taken Sept. 23, 2013, a sign at “Kurt Cobain Landing,” a tiny park blocks from the childhood home of Kurt Cobain, the late frontman of Nirvana, honors him as it overlooks the Wishkah River in Aberdeen, Washington.AP FILE PHOTO

WASHINGTON — The Rock and Roll Hall of Fame announced Monday that Nirvana, Kiss, Peter Gabriel, Hall and Oates, Cat Stevens and Linda Ronstadt will be inducted next year.

The Cleveland, Ohio institution also said Brian Epstein, manager of the Beatles from 1962 until his death in 1967, will be inducted for Lifetime Achievement.

So will Rolling Stones manager Andrew Loog Oldham, the hall of fame said, saying he propelled the Stones to “worldwide stardom and crafted their bad boy image so well it became both their brand and burden.”

Oldham “helped shepherd a run of landmark recordings that continues to bear influence a half-century later.”

Another honoree is The E Street Band, which Bruce Springstreen formed in 1973. It helped “establish Springsteen’s legendary reputation as one of the greatest performers in the history of rock and roll.”

Springsteen himself was inducted into the Hall of Fame in 1999.

The rule for eligibility to join the Hall of Fame as a performer, composer or musician is to have released a record at least 25 years prior to the year of induction and “have demonstrated unquestionable musical excellence,” in the words of the Hall of Fame.

Nirvana, led by the late Kurt Cobain and whose first single “Love Buzz” came out in 1988, is getting in in their first year of eligibility. “That’s really no surprise to me,” Rock and Roll Hall of Fame President and CEO Joel Peresman told Rolling Stone magazine.

Cobain, who struggled with substance abuse, committed suicide in 1994 at the age of 27.

The induction ceremony will be held in April of next year in Brooklyn, New York.