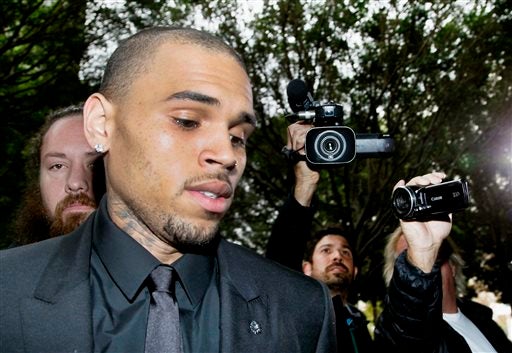 In this Wednesday, Nov. 20, 2013, file photo, singer Chris Brown arrives at court for a probation review hearing , in Los Angeles. A judge on Monday, Dec. 16, 2013, revoked Brown’s probation after his recent arrest on suspicion of misdemeanor assault in Washington, D.C., but the ruling will not alter the singer’s requirements to complete rehab and community labor for his 2009 attack on Rihanna. (AP Photo/ Nick Ut, File)

LOS ANGELES —A judge on Monday revoked Chris Brown’s probation after his recent arrest on suspicion of misdemeanor assault in Washington, D.C., but the ruling will not alter the singer’s requirements to complete rehab and community labor for his 2009 attack on Rihanna.

Superior Court Judge James R. Brandlin cited details contained in an arrest report as his reason for revoking Brown’s probation for the second time this year. He ordered Brown to return to court Feb. 10 for an update on his progress in rehab.

Prosecutors did not request that Brown be sent to jail during Monday’s hearing.

In November, Brown was ordered to spend 90 days in a treatment program for anger management and other issues. Brandlin said probation officials reported the Grammy-winner was handling the program well in recent weeks.

Brandlin reviewed Brown’s October arrest report filed after a man accused the R&B singer of hitting him outside the W Hotel in Washington. Brown and his bodyguard were initially charged with felony assault, but the case was reduced to a misdemeanor. Brown has been ordered to appear in a D.C. court on Jan. 8.

Brown’s attorney Mark Geragos said he agreed with Brandlin’s decision to revoke probation but not send his client to jail.

Brown’s probation was revoked earlier this year over a misdemeanor hit-and-run in Los Angeles and concerns that he hadn’t completed six months of community labor for his 2009 attack on Rihanna, who was his girlfriend at the time. Brandlin ordered the singer to perform an additional 1,000 hours, and Brown has so far completed 60, according to his probation report.

An official at Brown’s rehab wrote in a letter included in the report that Brown is no longer taking medical marijuana and with the aid of other medications is now able to better “emotionally regulate himself.”

Brown voluntarily entered rehab after his Oct. 27 arrest but was forced to leave the program after he threw a rock through his mother’s car window after a treatment session. Brandlin ordered the singer back into rehab last month.

He was ordered to serve five years of probation for his pre-Grammy attack on Rihanna in 2009. He has until August to complete his community labor sentence, which requires him to perform roadside cleanup, graffiti removal or other supervised manual labor.