Reaching a Star, Mars and the heavens 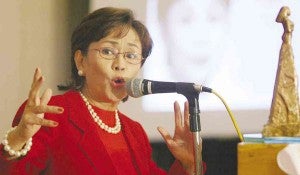 The day before controversial news on Governor Vi (Vilma Santos) broke—she was being asked by the Commission on Elections (Comelec) to resign due to alleged failure to submit her statement of election contributions and expenditures (Soce)—I joined her and hubby Ralph Recto at the family lunch they hosted for their clan in Outback Libis. They were celebrating their 21st wedding anniversary, which coincided with the 40th day of the passing of Ralph’s mom.

Ate Vi was in high spirits as she table-hopped. Her warmth enveloped the entire venue. So, I got worried when I heard the news the next day.

Even so, I knew in my heart that she’d breeze through it, with her good nature and cheerfulness. Just the other weekend, I witnessed her dedication to her constituents in Batangas when I was a guest judge in the Ala Eh Festival’s singing tilt, “VSR” (“Voices, Songs and Rhythms”).

After the week-long festival, Ate Vi got sick due to fatigue. I checked on her and she replied via SMS:  “There are two conflicting provisions in Comelec rules. [One] requires the candidate and party treasurer to file; [the other] allows the candidate or treasurer to file. I got my certificate of compliance, so that means I complied. Dapat pag-file pa lang namin, sinabi na nila, they need the signature of the candidate.

“We didn’t even get a notice to inform us re: corrections. Anyway, just to suit [the] Comelec interpretation, we will submit a Soce with my signature. I don’t want them to make it seem like I’m irresponsible.”

Gov. Vi’s track record speaks for itself. The Star for All Seasons gamely signs autographs for fans. What more for her beloved Batangueños? There’s no way she would deliberately fail to sign an important document.

It was quite a delight to meet the Filipino uncle of Bruno Mars, John San Pedro, at our Thursday Club bonding in Bellissimo with my BFF Cesar Montano and bestie Alvin Anson.

He told me that Bruno will be back in March for another major concert here in Manila.

I was amused to find out how the half-Pinoy pop superstar (Peter Gene Hernandez in real life) came up with his screen name.

Since he was pudgy as a kid, people called him “Bruno,” the name of a famous wrestler back then. When he started doing auditions in Los Angeles, he used the nickname. But the agents wanted him to add a surname. So he thought of “Mars,” since he wanted his music to be “out of this world.” The rest is history.

I am immensely touched that Ryan Cayabyab has personally invited me to the conferment of his Papal Award Pro Ecclesia Et Pontifice on Dec. 21, at the Chapel of Villa San Miguel in Mandaluyong. The pontifical Mass will be officiated by Archbishop Socrates Villegas.

The choirs will be singing Maestro Ryan’s “Sacred Works” songs. I chided Mr. C, “Someone as naughty as I am might be out of place in your super-holy event.”

He shot back, “I’m not as holy as my religious compositions. But bring a veil just in case.”

Kudos, “Your Eminence!” Brilliance is a gift you were born with. Good to know that you’re still within my reach even if you’re already way up there!

Globe Telecom used its recent launch of the iPhone 5s and 5c to augment its disaster relief efforts to help victims of typhoon-stricken communities.