The superiority of ‘Smaug’ | Inquirer Entertainment

The superiority of ‘Smaug’

Making a successful sequel to a box office blockbuster film is really quite like squaring off with a dragon: It’s an unenviable task that becomes more difficult the larger the dragon. Yet 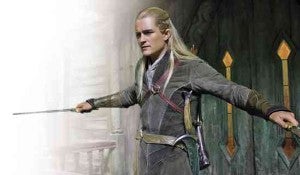 some sequels of big first films were also some of the best, ever, and obviously better than their predecessors, “The Empire Strikes Back,” “The Dark Knight” and “The Godfather: Part II,” among them.

Director Peter Jackson’s “The Hobbit: The Desolation of Smaug” faces the double challenge of not only following “The Hobbit: An Unexpected Journey,” but the two prequel films to Jackson’s “Lord of the Rings” (LOTR) trilogy will face endless comparisons to his earlier Middle-earth works.

Middle-earth fans take comfort: “Smaug” is much, much better than the film it follows. It does not have to deal with introducing armies of characters or explaining the motivations behind the first important quest. Instead, “Smaug” is brisk and action-packed for most of its nearly three-hour running time, with the characters effectively running through most of that time.

Unlike Jackson’s LOTR trilogy, where each film is based on one of the three books comprising J.R. Tolkien’s fantasy classic trilogy, “Smaug” is one of three movies adapting Tolkien’s first book, 1937’s “The Hobbit, or There and Back Again.” Instead of having to condense and delete material, screenwriters Jackson, Fran Walsh, Philippa Boyens and Guillermo del Toro had to add material and expand the book’s world to fit three movies.

“Smaug” shows that such a process can produce coherent, rousing movie-making and still stay true to the source material. It’s a monster of an undertaking, one managed by Jackson and his own fellowship (including LOTR composer Howard Shore, cinematographer Andrew Lesnie and world builders Weta Workshop).

Set 60 years before the events of LOTR, “Smaug” finds the characters—Hobbit Bilbo Baggins (Martin Freeman), wizard Gandalf the Grey (Ian McKellen) and the 13 Dwarves, led by Thorin Oakenshield (Richard Armitage)—barely getting away from pursuing orcs and wargs. Unlike the Bilbo-centric “Journey,” they have to split up, the movie splintering into several separate threads.

Bilbo and the Dwarves encounter spiders and Elves, including the lady warrior Tauriel (a new creation, played by Evangeline Lilly of “Lost”) and the arrogant archer Legolas (still played by Orlando Bloom). The company passes through Laketown, in the shadow of their ultimate destination—the Lonely Mountain—where a man named Bard (Luke Evans) speaks of a prophecy that could destroy the town. All this leads to the film’s central conflict: The company versus the dragon Smaug.

Freeman gets less screen time here but is fun to watch as Bilbo displays newfound determination. It is Armitage who gets the dramatic moments, effectively conflicted as a king without a crown. In this massively CGI-empowered film, Jackson has continued to revel in the visual vocabulary of

Middle-earth. What a world he has created, one that displays technology’s power to transform cinema with every subsequent release.

But the film’s masterpiece is Smaug himself. Voiced and motion-captured by “Sherlock’s” Benedict Cumberbatch, Smaug may be the most impressive CGI creature ever rendered. Cumberbatch is perfect, as his booming baritone drips with casual terror and the tone of a predator playing with prey.

Come for the Hobbit, stay for the dragon. After watching this sequel, you will be counting the 12 long months until that final film, “The Hobbit: There and Back Again.”

“The Desolation of Smaug” outshines its predecessor by a Middle-earth mile—it reminds us this prequel trilogy can be every bit as magical as the three LOTR films.

Warner Bros.’ “The Hobbit: The Desolation of Smaug” opens in theaters Wednesday.

TAGS: “The Empire Strikes Back, “The Godfather: Part II”, “The Hobbit: The Desolation of Smaug”, Legolas, Movies, Orlando Bloom, The Dark Knight