A ‘cool conversation’ with Lea 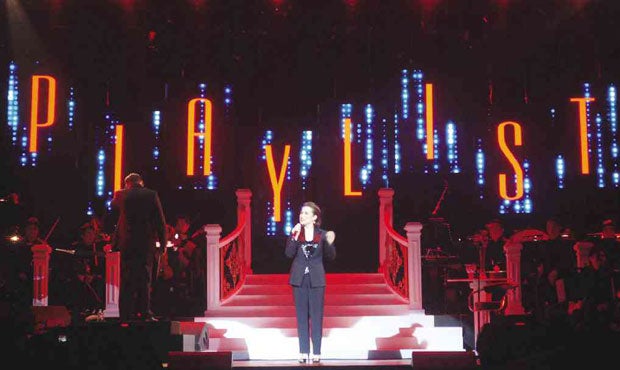 SHE ADMIRES Barbra Streisand for her clarity, precision and expression. 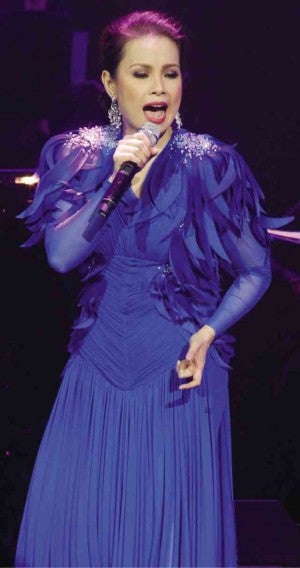 SHE SHOWS off her vocal chops… and a little leg, too, in the two-hour concert.

With a flick of his baton, Gerard Salonga set the ABS-CBN Philharmonic Orchestra into motion—“Sun and Moon,” “Reflection,” “I Am But a Small Voice.” The music, gentle and dreamy, cast a blanket of nostalgia over the well-heeled audience. At the back, eight video screens hung like picture frames, each one showing precious and defining moments in the illustrious, 35-year career of one of the most famous artists this country has ever produced.

Lea Salonga emerged onstage, an image of understated elegance in a black suit. The sight of her turned the crowd at the Philippine International Convention Center (PICC) Plenary Hall last Friday into a chorus of resounding cheers and applause.

She cracked a smile and started to open her mouth. In an instant, a hush fell over the venue, the better to hear Lea glide through “Do You Know Where You’re Going To?” And when she had everyone mesmerized with that crystalline voice, Lea abruptly changed gears and tackled “Girl on Fire,” effortlessly shifting from velvety and serene to steely and feisty. And she had just begun.

Formally welcoming the crowd to the first of two nights of her anniversary concert, “Playlist,” Lea said. “We have prepared a musical kwentuhan for all of you. Think of this evening as a cool conversation with good friends and good music. I’ll let you in on the songs that I’ve been listening to throughout the years—some new favorites, as well as songs that make up the soundtrack of my life.”

The program was a mix of contemporary hits, classic ballads, disco tunes, Filipino songs and, of course, showpieces from theater musicals. Every so often, Lea would throw in an oddball that she made completely her own, as when she did an acoustic rendition of “Blurred Lines,” this year’s most controversial hit song.

Backed expertly by guitarist Cesar Aguas, Lea, traded sleaze for sass; her delivery was cheeky, her tone at times taunting. Hooting and hollering throughout, the pleasantly surprised crowd clearly enjoyed it.

She will always be a girl of the ‘80s, Lea declared. She recounted her teenage years in a decade when girls “unfortunately” spent mornings teasing their hair and cementing it with half a can of AquaNet—the same times when glitter and shoulder pads were de rigueur and considered stylish. 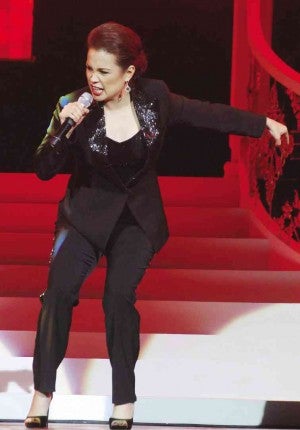 SHE SHIFTS from velvety and serene to steely and feisty in a heartbeat.

The fashion sense, Lea said, was “questionable.” But there was no questioning, she added, that the ‘70s, ‘80s and ‘90s, “gave us some of the most amazing songs.”

On that note, Lea started humming the intro to an ‘80s anthem, Whitney Houston’s “I’m Every Woman.” This was followed with “Run to You,” “I Will Always Love You” and Donna Summer’s “No More Tears.”

While thoroughly impressive in the dramatic, vocally-demanding numbers, Lea was at her best when she let the purity of her voice control the more subtle, wistful songs. One could hear a pin drop as she delivered a virtual master class in singing Maureen McGovern’s “The Morning After” and Barbra Streisand’s “Evergreen”—rendered devoid of frippery, but still brimming with emotions.

Other standout performances were “Higher” from the musical “Allegiance,” “Back to Before” from “Ragtime” and “Magbalik Ka Na Mahal” from “Rama Hari.” She delivered almost every song with clockwork precision, but there were rare moments that showed that she was, after all, human. For instance, she couldn’t help bursting into laughter during a duet of “You” with “The Voice of the Philippines” champ Mitoy Yonting, after being distracted by an overzealous supporter professing his love for her.

Or perhaps that moment when Lea giggled after realizing that she had started singing ahead of her cue in “Sana Maulit Muli.” These little things, however, only made her more charming and endearing. 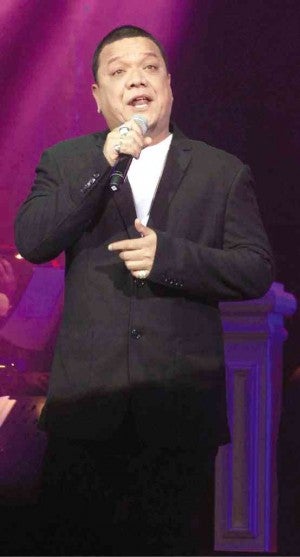 Another highlight was when the original “Kim” met the new “Gigi.” Rachelle Ann Go, who will play Gigi in the 2014 revival of “Miss Saigon” in London’s West End, and Lea gave a powerful performance of “Movie in My Mind.” Sharing the stage with Lea was a dream come true, Rachelle Ann said. Coyly, she asked Lea for some tips. But the way she rendered “Part of Your World” from “The Little Mermaid,” we could tell that Rachelle Ann will be just fine in London.

Comedienne Ai-Ai de las Alas also dropped by and engaged Lea in a riotous banter that had everyone in stitches. They did a duet of jukebox hits, like Imelda Papin’s “Isang Linggong Pag-ibig” and Aegis’ “Halik.”

For the encore, Lea came out in a ravishing turquoise dress with a slit that slightly revealed her left leg. And as the audience roared for more, Lea quipped, “More songs or more leg?” Of course they wanted both. So, after jokingly showing of a bit more skin, she proceeded to perform two holiday carols,“I’ll Be Home for Christmas” and “Jingle Bells.”

The night ended in spirited fashion, with Lea prancing around the stage and urging everyone to move their bodies to ABBA’s “Dancing Queen.”

Long after Lea had bid goodbye and exited the stage, people were still on their feet, clapping and hollering, as if willing her to return. Certainly, after more than two hours of music, her fans still couldn’t have enough of the 42-year-old artist.

Midway through the concert, Lea said she admired Streisand for clarity, precision and expression—the very same tenets that she lived by, she noted. “Her expression is just so simple and yet beautiful. She has that kind of voice I’m attracted to: No BS, just music.”

That could also be said about this anniversary concert: No BS, just music.