As the Singaporean film’s closing credits rolled, a familiar voice caught me by surprise: Lolita Carbon singing “Kahapon at Pag-Ibig.” Iloilo” went on to win the Camera d’Or (for first-time filmmakers) at Cannes, along with a slew of awards from around the world—including top prizes in Taiwan’s Golden Horse and, recently, the audience award at the Tokyo FILMeX

There I was, one of two Filipinos in the morning screening of Anthony Chen’s “Iloilo,” at the Directors’ Fortnight of the Cannes film fest last May.

As the Singaporean film’s closing credits rolled, a familiar voice caught me by surprise: Lolita Carbon singing “Kahapon at Pag-Ibig.”

“Iloilo” went on to win the Camera d’Or (for first-time filmmakers) at Cannes, along with a slew of awards from around the world—including top prizes in Taiwan’s Golden Horse and, recently, the audience award at the Tokyo FILMeX.

Filipino Angeli Bayani, who plays a maid in the home of a Singaporean family grappling with financial woes, has also been nominated for best actress at the 56th Asia-Pacific Awards to be held in Macau on Dec. 15. 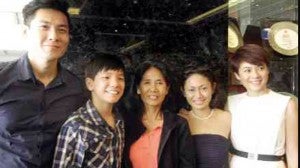 In a lot of ways, Carbon’s voice merged with that of Bayani’s character, Auntie Terry, loosely based on Teresita Sajonia—the Ilonggo nanny, now 56 years old, who was employed by Chen’s family for eight years.

To think that Chen stumbled on Carbon’s song purely by coincidence.

“It’s a song by the [1970s] band Asin,” Chen told the Inquirer in an exclusive interview. “I wanted to play a Filipino song at the end of the film. So I turned to iTunes and listened to, and downloaded, lots of songs.”

All he knew was that he wanted a song from the past. Then he discovered a small gem entitled “Kahapon at Pag-Ibig.”

“The song just caught my ear,” he recalled. “I was moved even before I knew what it meant. When I checked the translation, I realized it suited the film.”

He also made “the conscious decision not to subtitle the song in the film.”

“I didn’t want to be so in-your-face and literal about it,” he conceded. “Even without understanding the lyrics, foreigners would surely be touched and affected by the song, too.”

When the production talked to Carbon for the rights to the song, “all she asked for in return was a DVD copy of the film. We’ll give her a proper DVD soon.”

No, it was not Auntie Terry’s favorite song and he didn’t grow up listening to Asin, Chen admitted.

“If I’m not mistaken, her favorites were Lea Salonga’s songs from ‘Miss Saigon,’” he recounted. “I remember she had a CD of that show when she was with us.”

It was just serendipitous that “Kahapon at Pag-Ibig” succinctly captured the film’s essence.

“A lot of times, decisions happen by chance. You get a gut feeling and it just clicks,” Chen said.

Another instinctive choice was retaining the film’s title—even though “Iloilo” might sound strange and unfamiliar to the rest of the world.

“I am quite grateful that we didn’t change the title,” Chen volunteered. “At one point, we thought of it … We had long discussions with our sales agent. We came up with 25 alternatives and we hated all of them.”

The province was one of the few things he remembered about Auntie Terry.

“It’s a nice name for a place. It’s cute, musical, recognizable and memorable.”

It was a brilliant marketing strategy as well because “Iloilo” would be instantly familiar to any Filipino in any part of the globe.

“I’ve been traveling with the film … to various festivals all over the world,” Chen related. “In every country, there would always be Pinoys in the theater. I just came from Stockholm … there was a group of Filipinos and they helped spread the word on Facebook.”

When it had a gala screening in Singapore on  Aug. 24, Chen made sure that Auntie Terry was in the audience. “It had been a long time … 16 years …  since we last saw her. It was emotional. She cried a lot. She stayed in our home for a few days.”

Not as a nanny, but as a guest.

He didn’t get to ask her comments on the film. “But she briefly said that I made her laugh and cry.”

Now back in Iloilo, Auntie Terry graced the gala screening at  Resorts World Manila on  Monday.

After Dubai, Hong Kong, Taiwan and the Philippines, next stops for “Iloilo” are Sweden and Korea in January 2014. In February, it will open in the United Kingdom. A March release in the United States is in the works, too. As Singapore’s entry in the best foreign language film category of the Oscars, “Iloilo” will be shown at the Palm Springs Film Festival in January.

“It’s an honor … but I am not thinking so far ahead,” he said of the film’s Oscar chances. “It feels impossible. We are up against films with millions of dollars to spend on the campaign. We have so little. I can’t even dream of it.”

Then again, that was exactly how he felt at the Cannes fest, and still the film won the Camera d’Or.

“It was very special. It was unexpected,” he said of the Cannes triumph. “It was probably the best thing to happen to a first-time filmmaker. We competed with 26 other films … some with bigger budgets and more prominent actors. It was a first time for Singapore to win. I just thought it would never happen.”

Read Next
A time for hope
EDITORS' PICK
National COVID-19 vaccination drive gets over 5.3 million people vaxxed so far
This new condo in the South will make you want to turn a new leaf
Pandemic prognosis: Where does it go from here?
Google won’t accept election ads for 2022 national polls
Legarda: Ending Violence Against Women, a cause for all
Smart offers wireless fiber-like speeds to Filipino homes with country’s first 5G Prepaid Home WiFi
MOST READ
Bongbong Marcos to face another disqualification case
Christine Bersola, Julius Babao cleared of cancer after colonoscopy, endoscopy
‘Maraming nagpapagkamatay sumali’: Bongbong-Sara’s full Senate slate out soon, says Imee
Tropical storm intensifies as it approaches PAR
Don't miss out on the latest news and information.