Where were you when JFK was shot? 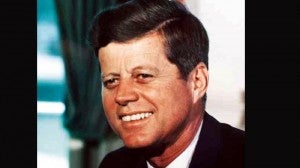 KENNEDY. His death was a collective national tragedy.

US TV specials this month are all about dramatizations and recollections of the assassination of President John F. Kennedy, a full 50 years ago in Texas, by Lee Harvey Oswald. Old, controversial questions are being asked again, like did Oswald act alone, or were there other conspirators involved? For the nth time, audio recordings of the actual shots fired will be timed anew to determine if it was humanly possible for the sniper to fire so many shots in such rapid-fire succession.

On a more personal level, the tragic story of America’s short-lived, modern-day Camelot will be sadly and regretfully told again, with Jack and his Jackie torn from each other so abruptly at the height of their youth and power.

And, what about their little children? First child Caroline, so poised in her grief and pain—and little John-John, practically still a toddler, breaking everyone’s heart when he “manfully” saluted the caisson bearing his father’s coffin.

Adding further to the sense of recurring tragedy is the fact that heir apparent John himself is gone, expiring in a plane crash and ending his own ascent to power, which some people saw leading all the way back to the White House!

Aside from Jack and his son, tragedy has also hounded the lives of his siblings, Robert and Teddy, not to mention any number of nieces and nephews with their individual travails, run-ins with the law, etc.

Finally, some people in the States are asking each other again, “Where were you and what were you doing when you first heard that JFK had been assassinated?”

That’s how seminal and unforgettable that shared experience was—a collective national tragedy that forced many people to quickly mature and forget the myth of America’s own Camelot, in favor of a more realistic and perhaps jaded view of life’s sometimes cautionary and even harsh ironies.

Where were you when JFK died? For our part, we were studying in the States on a Rotary International fellowship, and we had just come out of our classroom at Northwestern University’s Graduate School. We hadn’t heard the news yet, so we were surprised to see our designated foster father, a Rotarian in Evanston, Illinois, waiting for us at the library entrance.

How were we, he wanted to know with grave concern? Had we heard about Kennedy being shot? How were we taking it? He hoped that we didn’t think that this sort of tragedy happened in the States all that frequently! The news had yet to fully sink in, but we assured our obviously shaken and worried “Dad” that we were OK.

Maybe he didn’t really believe us, because he got permission for us to skip our next class, and insisted that we spend the rest of the day with him and his wife. Fact is, we stayed overnight with them, and they didn’t let us go until they were fully reassured that we were indeed “OK.”

Throughout the rest of our year as a Rotary scholar in the States, we saw how JFK’s assassination had a profound effect on many people’s view of life and the world, with some Americans admitting that it forced them to “grow up” and see the world as it really was.

For our part, it would take more years to do that, but it did leave us with a profound sense of loss—and a disquieting premonition of even more tragic global denouements to come—!

Coronavirus spreading now in Korea has its origin in Europe, US