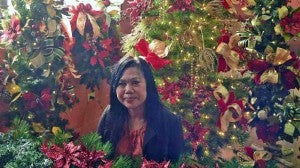 BERMAS, with her holiday-themed

Lalaine Bermas grew up with her three brothers and a sister in Camarines Sur. She lives in Villa Karangahan subd., Naga City, with her hubby, Jonathan Bermas, and their son and two daughters.

She has a degree in Business Administration from Central Colleges of the Philippines. For 16 years, she worked as an export/import documentation officer at Tamilee Industries, where she discovered her decorating skills.

After a series of workshops, Lalaine gained more confidence in her newfound skills and decided to put up Petals & Pods Decor in Naga, which offers the services of on-call decorators for baptisms, weddings, debuts and other special occasions.

During the holidays, she decorates ABS-CBN’s morning show in Bicol, “Marhay Na Aga Kapamilya,” as well as private residences and government offices. I met her because she’s been decorating the LRI Design Plaza, giving the place a cheerful, holiday vibe.

Join our Amazing Batanes Photo Safari on Dec. 27-30 or from January to May next year. We also have workshops in General Santos, Lake Sebu and Sarangani, and Marinduque. E-mail [email protected], or text 0915 543-0482.