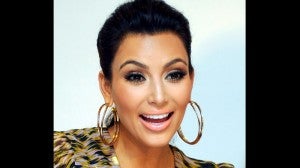 MANILA, Philippines–Reality television star Kim Kardashian is under flak after she revealed that only 10 percent of the proceeds from her eBay auction will be donated to the survivors of Supertyphoon “Yolanda.”

Kardashian wrote in her website how “a portion of the proceeds are going to International Medical Corps,” little did people know, the “portion” was a mere tenth of the earnings from her eBay auction.

International Medical Corps is a nonprofit organization that provides critical health services on remote islands where families are struggling to access medical care and basic resources like food, clean drinking water and vital medications, Kardashian wrote in her website.

According to businessinsider.com, the 10 percent “portion” is part of the fine print associated with the online selling of products including Marc Jacobs, Chanel, Dolce & Gabbana, and Prada.

The 33-year-old has a reported net worth of $40 million and earned $10 million this year alone was bashed as conducting her auction as a “publicity stunt” by her own fans.

One fan wrote, “If this is true, I feel you are using the victims of that disaster for your own personal gain.”

Another wrote, “It would seem that you can afford to sell off some of your used personal items, and then donate the complete profit to these poor unfortunate victims instead of using them to profit yourself.”