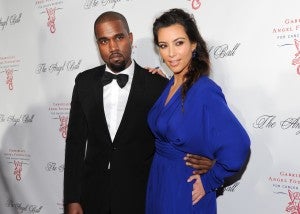 NEW YORK — Marriage is coming after the baby carriage for Kim Kardashian and Kanye West.

E! News first reported that West proposed to Kardashian Monday — her 33rd birthday — in front of family and friends at the AT&T Park, home of the San Francisco Giants.

A photo posted on Instagram shows a screen at the stadium that reads “PLEEEASE MARRY MEEE!!!” — in typical West font — above a black-clad orchestra. Another shows Kardashian showing off a diamond ring with a smiling West behind her.

The Kardashian clan has a series of reality shows on E!, but the network said Tuesday it did not have cameras at the stadium to capture the moment.

Khloe Kardashian seemed to celebrate on Twitter when she wrote: “Tears of JOY!!!!!!!

Kardashian was previously married to NBA player Kris Humphries. Their divorce was finalized in June after they were married for 72 days in 2011. Her first marriage was to music producer Damon Thomas in 2000.

West is currently on a tour with Kendrick Lamar. “The Yeezus Tour” will visit the SAP Center in San Jose on Tuesday night. Earlier Monday, he attended the Hollywood Film Awards in Beverly Hills, presenting Steve McQueen with the Hollywood Breakout Director Award.

Read Next
The Walking Dead is back, now on its fourth season
EDITORS' PICK
Lacson wants DOF to suspend TRAIN law as oil prices rise
Duterte blasts rights groups for overlooking the ‘other side’ of drug war
Leaked: A 60x Zoom and all-new Helio G96 mean a complete overhaul for TECNO Mobile’s new CAMON 18 series
Delivering delight against all odds
Next level mobile photography within reach with vivo X70 co-engineered with ZEISS
153 protests filed vs China actions in PH waters in 2021 — DFA
MOST READ
Robredo to supporters: Be calm, gentle and do good deeds
Matibag calls Senate budget hearing ‘political,’ gets kicked out
Duterte inaugurates P684-M bypass road project in Quezon
Duterte: No drug dealers among the rich in PH
Don't miss out on the latest news and information.