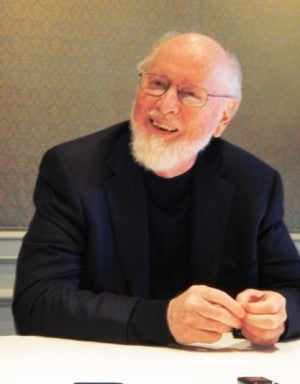 LOS ANGELES—At 81 years old, legendary composer John Williams is busier than ever, as he scores JJ Abrams’ “Star Wars: Episode VII” and is raring to work on Steven Spielberg’s “Indiana Jones 5.” John quipped that he expects to be working until he’s 100 and beyond. The Oscar and Golden Globe awardee’s credit list is staggering as it stands: all six “Star Wars” films, the first three “Harry Potter” films, the “Indiana Jones” films, “E.T., The Extra-Terrestrial,” “Jaws,” “Close Encounters of the Third Kind” and “Schindler’s List,” just to mention a few.

The man, whose career spans six decades, is responsible for some of the most memorable movie-music passages. Most of that hummable cinematic music is from his 40-year collaboration with Steven.

“I met Steven when he was very young, over 40 years ago, when he asked me to do the music for his first feature film, ‘Sugarland Express,’” said John in a recent interview.

“I’m quite a bit older than he,” John said of Steven, his frequent artistic partner. “It’s been, for whatever reason, always a wonderful relationship. Since he is younger than I am, I will try to keep up with him, do the music for ‘Indiana Jones 5.’ I will try to keep up with the other gentlemen, including JJ Abrams, who’s doing ‘Star Wars VII,’ and we will see how long my eyesight will hold out. —That’s the present state of things.”

“I have a little theory about Steven Spielberg, whose father, Arnold, is a most wonderful man,” said the Boston Pops’ Laureate Conductor. “Arnold is well into his 90s. He was always working. I think every man and woman thinks, if your father was working at 90, that’s also what you will do. So, I think Steven expects to be directing 25 years from now—and he fully expects me to be with him. I will be over 100 years old then, so I will do my best.”

John latest work is Brian Percival’s adaptation of Markus Zusak’s novel, “The Book Thief,” a World War II drama where music is a critical element in establishing the story’s themes and characters. Brian, a longtime fan of John’s, said in the film’s production notes, “John saw this film as a departure from some of the work he has done in the past, including the huge, fanfare scores for which he is best-known. His score for ‘The Book Thief’ is a very emotional one.”

When we asked him for at least three film scores that he’d like to be remembered for, one of John’s picks was a surprise.

“I always remember certain passages in ‘Close Encounters…’ that I particularly enjoy playing with orchestras, away from film, so that may be indicative of something.”

He added, “And several movements of ‘Star Wars’ I also continue to have interest in as a performer. I did a television version of ‘Jane Eyre’ years ago (1970), directed by Delbert Mann. I wrote that new score in London many years ago. I have continued to enjoy revisiting that. So, in my case, that’s been a good measure of what I like that I have done in the past. If I don’t pick it out of the library and don’t want to perform it, it means that I don’t particularly want to return to it.”

Asked how he goes about creating those memorable scores, John, who’s also the artist-in-residence at Tanglewood, replied, “I used to smoke a cigar, but I don’t anymore. Of course, a composer needs to be alone, and he needs to be in a quiet place. And I have a magnificent Steinway that’s been part of my life for so many years.

“The process begins with me writing a passage and rejecting it, writing another passage and liking some part of it and trying to keep that. It becomes a process in my mind, like sculpting, you keep cutting on something and, eventually, it reveals itself to you. The most difficult part of scoring films isn’t actually doing the scenes but creating the material for the film and its themes. Even if they’re a simple tune like ‘Indiana Jones,’ I find those very hard to uncover!

“Sometimes, it takes weeks of changing things and moving them around, and a few simple notes, to eventually guide it into a state of inevitability, where the ear doesn’t have any argument any longer about the path we’ve taken melodically.”

Not surprisingly, John still composes the traditional way. “I am slow,” he stressed. “I don’t have a computer. I only have paper and a pencil, very antiquated tools, but still useful. So, I write every note. Therefore, I can’t quite keep the schedules like my younger colleagues would be able to do who use synthesizers—because if they’re going to write a 32-note scale this way, they can play it on their keyboard, and it’s done! I have to write 32 notes and the harmonization we need, as well.”

John has three children with his first wife, actress Barbara Ruick, who died in 1974. He remarried in 1980 to Samantha Winslow. “My children are grown,” he said. With a grin, he quipped, “They don’t have to put up with it (his music-playing and composing) any longer. My wife is brilliant. She’s not very interested in music. I think it’s a good relationship. She doesn’t go to concerts, so I go alone or with my daughter. It’s very interesting.”

On whether he listens to popular music like rock, country or rap, John answered, “No, I don’t—but, I probably should. There’s a lot to listen to in music. I haven’t even heard all of the Haydn symphonies yet—and time is limited. You probably know the famous quotation of Rachmaninoff who said, ‘Music is enough for a lifetime, but a lifetime is not enough for music.’”