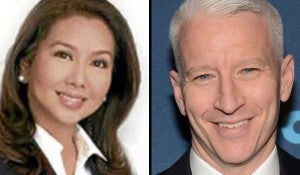 In her daily primetime newscast, Sanchez made an on-the-spot report in Ormoc City, which is about 105 kilometers away from Tacloban City, considered the “ground zero” of the typhoon’s wrath.

Also on Thursday, Cooper aired his latest report on the typhoon victims focusing on the sick and wounded recuperating in make-shift hospitals in Tacloban City.  He interviewed doctors and patients who are reportedly still lacking in food and water.
Sanchez earned the ire of netizens on Wednesday when she criticized Cooper and his initial report on the typhoon victims, highlighting the slow response of the Philippine government in collecting the rotting corpses on the streets and giving relief goods to those trapped in what was considered “no man’s land.”

In her early morning radio show, Sanchez was quoted as saying that Cooper doesn’t know what he’s talking about because the government’s assistance was present.

For that, Sanchez was pilloried by netizens, saying she had no right in disputing Cooper’s news report because she’s in the air-conditioned newsroom in her home studio making comments while Cooper was reporting from Tacloban.

Meanwhile, in an INQUIRER story Friday, it was reported that local and foreign journalists earned the ire of some typhoon survivors for the “special treatment” given to them by the government.

On the ground while covering stories, a team from CNN was singled out for reportedly getting “babysitter-like assistants” from an agency under the Office of the President.