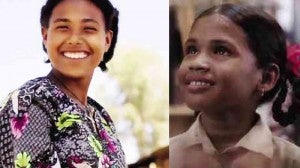 AZMERA of Ethiopia and India’s Ruksana (right) are also featured in the film. INQSnap the page to view the trailer! VIDEOGRAB

We know they could have had a better life.

The numbers are from various children advocate organizations who lend their voices in  “Girl Rising: Educate the Girls, Change the World,” a film that shows how an informed, educated, and courageous child can change the world.

Being screened nationwide since the celebration of the International Day of the Girl on Oct. 11, “Girl Rising” tells the true-life story of nine girls from nine countries—Nepal, Cambodia, Haiti, Ethiopia, Sierra Leone, Egypt, India, Peru and Afghanistan—who triumphed over years of bondage and poverty through education.

Shown during a press preview were excerpts that tackle the stories of Sokha from Cambodia, Wadley from Haiti and Suma from Nepal.

“This is not the end of my life; it is the beginning,” Sokha, a Cambodian orphan/scavenger, seemed to say.

In Cambodia, only 20 percent of the children go to high school. After years of dwelling on the streets, Sokha found her way to school and her life has changed.

Grammy Award winner Alicia Keys, who narrates Sokha’s story, says on the film’s website: “It’s an honor to be a part of ‘Girl Rising.’ It’s a powerful film that has potential to inspire change in the world. If you’re not moved, you’re not breathing.” 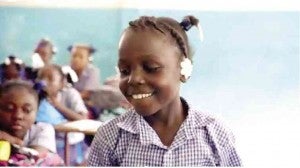 WADLEY from Haiti sneaked into a school every day until she was allowed to stay. videograb

Wadley, 7, stopped formal schooling to stay home and do the house chores, after her community was devastated by an earthquake. But every day, she sneaks into a class at a temporary neighborhood school, hoping the teacher will not notice. She persists in spite of repeated rejections and orders to leave.

“Even if you send me away, I will come back every day until I can stay,” she tells the teacher, who eventually gives up.

This story was written by Edwidge Danticat, a finalist for the PEN/Faulkner and National Book Awards and winner of the American Book Award. Cate Blanchett narrates.

“I believe not only in a girl’s right to an education, but also in the power of storytelling through film. I am proud to have done this,” Blanchett also wrote on the film’s website.

Suma, a kamlari or child slave, left home when she was 6 as “payment” for family debts.

For 12 years, she served different masters. Singing became her only escape from the daily toil.

Fortunately she met a social worker and started secretly attending night school. Her employer found out and tried to stop her but the social worker fought for Suma’s rights. At age 18, in 2007, Suma was rescued. She now helps fight for the rights of other girls, especially those sold to slavery, like she was.

Last year, sponsors brought her to the World Conference in New York where, as a guest speaker, she shared her story.

“Every one of our journeys overseas was a life changing experience,” said Director Robbins in a prepared interview transcript. “We shot in some of the roughest circumstances I’ve ever encountered, worse even than when I was working in war zones for ABC News.” 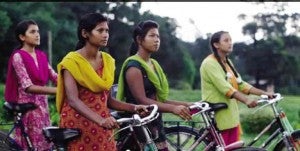 In another interview with CNN, Robbins related that the film took six years to make.

He recounted shooting in Peru at 17,000 feet in the snow, working a Steadicam through a tent camp in Haiti, and filming on an “insanely crowded street in 105 degree heat” in Calcutta.

“Every time our energy flagged, or we encountered production problems, we needed only to glance over at the girl whose story we were telling and everything seemed possible. They never felt sorry for themselves. They had boundless energy and optimism. They worked harder than I did… and I work pretty hard,” said Robbins.

His goal, he stressed, was for the audience to care about these girls. “And I want them to care enough [to] want to try and do something to help. Because they can help. It’s that simple.”

Other celebrity narrators are Anne Hathaway, Selena Gomez, Liam Neeson, Priyanka Chopra, Chloe Moretz, Salma Hayek, Freida Pinto, Kerry Washington and Meryl Streep. Not one of them charged a fee for their services.

In a statement, the production company 10×10 said the narrators were chosen for their commitment and willingness to support the campaign for girls” rights, and their capacity to attract attention to the message.

The writers came from the featured countries, the better to situate the stories according to their cultures. They were selected based on their storytelling expertise which, the filmmakers hope, will bring each girl’s experience to life and bridge the gap between each girl’s world and that of the viewers.

Speaking of the girls themselves, 10×10 underwent a “difficult” selection process, checking on  the children’s backgrounds. Writers were given access to previously prepared profiles, photographs and interview videos.

This was all executed with  10×10 founding partners The Docgroup, CNN Films and Vulcan Films.

“We’ve seen the inspiring transformation that happens to girls and their communities when they are empowered through education,” said Calum Chisholm, country manager of  Intel Philippines, before the press preview.

Intel, Plan International and Asian Development have partnered with 10×10 to spread the film’s message through local screenings.

Also at the press event, Carin Van der Hor, Plan International country director, expressed optimism for many more screenings. The film has not been released commercially.

Parties who would like to hold their own screenings may make arrangements by logging on to  http://10x10act.org, or e-mailing [email protected] Or call Liezl Dunuan, tel. no. 926-5356.