Scream Park in Manila: ‘Less is more’ even when the goal is to scare 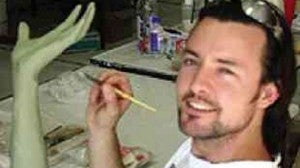 They should then do research and keep “practicing.”

“The Walking Dead” is an American horror-drama television show based on the comic-book series of the same name. It premiered on Fox International channels in November 2010 and is now on its fourth season.

“Always remember not to use too much. Less is more. With the humidity and weather in the Philippines, you can’t put too much makeup on. It will only look fake,” Willis said.

The US-based creative director behind movies like “The Matrix,” “House of Wax” and “Star Wars,” said: “I always tell young artists that in horror or makeup effects, it’s not about seeing everything. It’s all about … not giving the audience too much information. The mind will create the suspense. It all comes down to the mood and the atmosphere. If you have that and a good story, you have a winner.”

Willis is currently in Manila to promote the “Halloween Haunts” Scream Park, which opened on Oct. 31. The 2.5-hectare horror adventure park  at the corner of Diosdado Macapagal Boulevard and Sen. Gil Puyat Avenue in Pasay City, will be open until Jan. 5.

Willis, who brought the first Western-inspired Asian scream park in Singapore, first came to the Philippines three years ago. “I was asked to do workshops. The trip was part of my Southeast Asian tour to introduce HD or high definition TV and camera,” he said. “When I’m not part of any production, I teach advanced skills … on how to understand digital technology and adapt to the advancement.”

Willis recalled how he came up with the idea to build a scream park in Manila. “It’s been a year ago … I commissioned a researcher to give me as much information on everything that terrifies Filipinos,” he said. “I learned that you are big fans of ‘The Walking Dead.’”

But local creatures like the aswang, White Lady, kapre and duwende will also be present. “The scream park this year will be based on the White Lady story and the classic Haunted House. We’ve got an old town—similar to Vigan and Intramuros—that’s been closed for a hundred years and just got reopened.”

Here are excerpts from our chat with Willis:

How different was doing makeup for big movies compared to the park?

It’s pretty much the same. This is actually similar to a big movie production. The only difference is that it’s live. You can’t cheat. In movies, we can cheat with the way the props are made, with lighting, smoke and sound. For this park, we want everything to be perfect.

What types of makeup will be used in the park?

We will have foam latex, silicone prosthetic and pancake makeup. We’ll be using the classic techniques used in the United States and in Singapore’s “Halloween Haunt.”

The characters will wear full makeup—even on their tongues and teeth. With the humidity here, we have to use materials that are water-proof and also things that are not easily removed when someone touches them.

Does this mean you will be staying in Manila for quite a while?

I’ll be here until this is over because I have to make sure everything is done well and properly. My team and I are also going to train locals. The aim is to bring new techniques and ideas to the Philippines. My staff keeps growing every day. I started with two assistants and now, I have 25 personnel and about 160 talents. There are also DJs and security personnel. We probably number about a thousand now.

Are you involved only with makeup or are you also into the park’s overall design?

My main expertise is makeup and effects and making monsters. The other side of what I do is being an art director in movies and in parks.

Of all the characters you have created, which was the most challenging?

In terms of film production, it’s definitely the characters in “House of Wax” and “The Matrix” trilogy. Those were big movies.

We’ve got about 150 characters for this scream park. We have a very cool aswang story. When I first heard [the story of the manananggal], I said, “This is disturbing. I love it!” I know that different provinces have different versions of the story. As an outsider, I think they are all fascinating.

The actors can’t be on for eight hours straight because of the heat. We have two teams. They each go on for 45 minutes to one hour. They take a break and then swap. We want to make sure they are well rested. The park opens at 6 p.m.

How young were you when you started doing makeup and effects?

I was 15 when I got into the movie business. I’m 37 now. I’ve been doing it for a while. I’ve always been a horror fan. I used to do fashion as well, but I realized that it was really not for me. I blame my eldest sister for making me watch “Hellraiser” when I was 12 years old. I went, “Why does this guy have nails on his head?” It was fascinating!

I’m also a big fan of “Insidious,” “The Conjuring” and the Japanese version of “The Ring.” The first “Saw” was the best in the series. “American Werewolf in London” was another film that got me into effects.