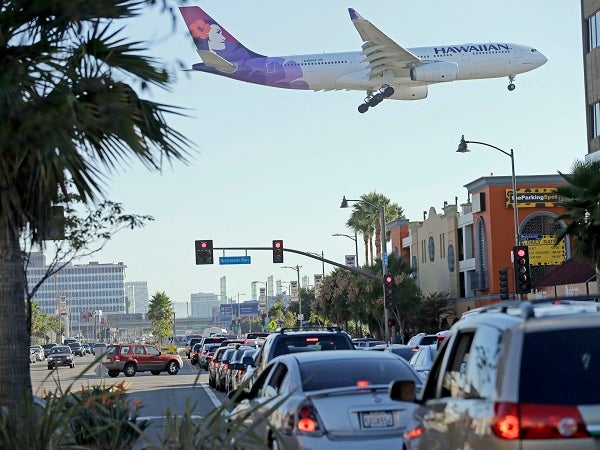 Cars are backed up over a mile as air traffic begins after a shooting at Terminal 3 caused a shutdown at Los Angeles International Airport, Friday. AP

“Then they told us the terminal was on lockdown, and we were asked to form these long lines, similar to those you see in Disneyland,” said Godinez, who flew in from Manila that morning.

Her plane landed around 8:40 a.m., not long before a gunman walked into LAX, pulled out an assault rifle out of his bag and opened fire. A Transportation Security Administration agent was killed and several others were injured. Three terminals were evacuated and shut down. Flights were restricted into LAX for several hours, and at least 118 flights en route to LAX were canceled or rerouted, according to news reports.

The stranded passengers were not allowed to use their cell phones, so Godinez had no clue why the terminal was shut down. A few hours later, airport staff informed them about the shooting.

“They told us that there could be a second shooter. I freaked out,” she said. “Everybody got down on the floor. With every little noise, we got jumpy. I kept thinking where we could hide if the gunman came after us. I realized there really was no place to hide. I just prayed for protection.”

Godinez said she felt sorry for a fellow Filipina, a tourist who was visiting the United States with her 12-year-old daughter for the first time. “They were supposed to meet friends in Van Nuys and drive to Las Vegas,” she said.

When they were finally released around 2 p.m., she managed to find her husband, Benito Miranda, who came to pick her up hours earlier but was caught up in what she described as a chaotic, almost surreal, scene outside the airport.

Godinez said people hurried with rolling bags and airport carts past ambulances, heavily armed cops and bomb-sniffing dogs. “No one was allowed in or out,” she said. “We couldn’t even get to where our car was parked.”

Evacuated passengers were loaded onto buses by the dozens, but Godinez and Miranda joined others who decided to walk off the airport grounds. They ended up walking for nearly an hour, from Terminal 5 to the 405 freeway, where their daughter picked them up. Godinez described the area around the airport, where roads had been closed, as “a ghost town.”

“It was quite an experience, but we’re just thankful that we’re safe,” she said.

The shooter, who has now been identified as Paul Anthony Ciancia, 23, was apprehended by police after being shot multiple times.