We are family | Inquirer Entertainment 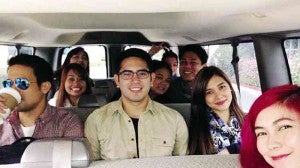 ON THEIR way to Santa Clara (from left), Sam Milby, Gerald Anderson, Maja Salvador and Yeng Constantino (foreground), with the rest of the team.

Oh yeah, I was part of it, too. This was my very first time being part of this wonderful event.

TFC began humbly in Raffy Lopez’s garage and has now grown into quite the organization with tens of thousands of subscribers all over the world. It has become a tether to the homeland for many Filipinos settled or working in different parts of the world, including North America, the Middle East, Asia and Europe. Where there are Pinoys, there is also TFC.

“Kapamilya Go,” launched in 2008, was created to bring a party atmosphere (adorned with some of the more popular ABS-CBN stars) to TFC subscribers. Thousands flock to the “OKGo” venue of choice for revelry, celebration and fun. But more than anything, it’s a way to bring a little bit of the homeland up close and personal to those living far away from it. 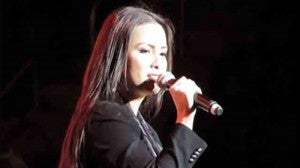 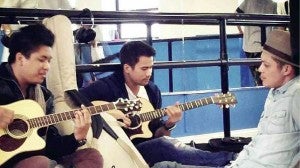 ON THEIR way to Santa Clara (from left), Sam Milby, Gerald Anderson, Maja Salvador and Yeng Constantino (foreground), with the rest of the team.

The weekend began on a Thursday with rehearsals at the Paganini International Institute for Music & Arts in Newark. All the stars (with the ex

ception of Cristine, Tart and Vivieka, who would rehearse later in the evening, and Richard and Jodi who were arriving the following day) reported for work, along with the TFC creative and engineering staff led by John-D Lazatin, our tireless director, and the Family Jewels dance crew (you guys were awesome, by the way).

We went through the entire show in sequence for blocking, for Maja to get a crack at her number with the dancers (thanks to Georcelle Dapat-Sy for the choreography and Maja is really good) and for the dancers to figure out what everyone else was going to do. I sat on the sidelines for much of it (I would be the last person to rehearse), which made it the perfect spot to take pictures, many of them posted on social media.

It was great to watch Myk Perez jamming with Sam and coach Bamboo before rehearsals; to catch a glimpse of the chemistry between Gerald and Maja (for the record, I think they’re adorable together); to see Sam and Gerald rehearse their version of Robin Thicke’s “Blurred Lines,” which turned out to be a highlight of the show; and to see the dancers do “Whoops Kiri” to the cheers of the entire cast. Yes, it was serious work, but there was time for many laughs.

After the workday was done, a few of us decided to head to Manhattan for some steak at Wolfgang’s Steak House on West 41st Street. Despite jet lag, most of us had a glass of red wine and some wonderful grilled meat, followed by a stroll in Times Square before returning to our Newark hotel for a good night’s rest. The following day would be a long one, so everyone was tucked in for the night relatively early. 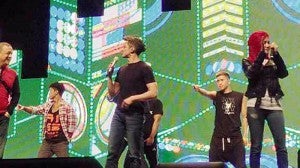 We would start the day with a special meet-and-greet with chosen TFC subscribers, many of whom had driven from places like Maryland, Pennsylvania and Washington DC, just for a glimpse of their favorite stars. Afterwards, the cast did final technical rehearsals at the performance venue, the Prudential Center (home of the New Jersey Devils hockey team).

The LED screen in the shape of a city skyline was erected, teleprompters laid down at the front of the stage and stage monitor levels fiddled with. Mixing sound levels in an arena this large was always a tricky proposition, hence a few of us had to use inner ear monitors to help find pitch and stay focused (mine were Ultimate Ears by Logitech). Then the time came to get ready for the show and to begin the night with a cast prayer led by Yeng Constantino.

This would be the same routine followed at Great America for the West Coast leg of the mini-tour. The audiences would be the same, too: incredibly receptive and wonderful, showing love for not just the performances, but to TFC for bringing the stars to the United States. It was an audience appreciative of the long distances traveled, just to put on a show; it was an appreciation of the network for making everyone feel connected to home. One spectator remarked that seeing the stars in person was something special versus just seeing them on television.

As for me, I was thankful for the opportunity to perform for the Filipino community as part of “OKGo.” As a newbie, it was great to get to know the people alongside whom I’d be working. It was one thing to see these incredibly beautiful faces at work on a teleserye or a variety show and to bump into them in the halls of ABS-CBN, but quite another to hang out with them over a steak dinner, a long plane ride or a wine-fueled jam session poolside after the final performance, along with TFC engineers, camera men, sound men and staff. 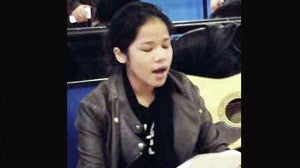 KLARISSE de Guzman memorizes the lyrics to a song.

For those of you who are wondering what these beautiful people are like, I’m happy to report they are even better up close and personal. Maja is funny and makulit in all the right ways; Cristine is blunt and honest; Sam is a tech freak, not hesitating to show off his gadget du jour (yes, we can see you can change the channels of the TV with your phone); Gerald is quiet and reserved, but very sweet; Tart and Vivieka are really, really funny; Jodi is incredibly sweet, but has the guts to engage Janice Javier in a singing showdown; Richard has a naughty sparkle in his eye; Bamboo can get really makulit and smiles more often than on TV; Yeng is very respectful to everyone around her; Klarisse plays a mean guitar (which I wish she did in “The Voice”); Mitoy does have his quieter, more contemplative moments and adores his wife; Myk is a veritable jukebox. I really missed everyone when it came time for me to travel the following day and head back to my own little world.

But for those few days, we became a little family: artists, handlers, assistants and staff. The word kapamilya was more than just a slogan or a tagline associated with a television network, but a philosophy and an environment. Thank you, TFC, for the invitation to be part of this wonderful event.